All activities mentioned in the previous update are successfully completed.  To recap, on 9/17, I got raw Merlot grapes (240 lbs) from Livermore which Leah and I subsequently destemmed and crushed with great effort.  And on 9/18, we got 1,000 pounds of Cabernet Sauvignon from El Dorado.  On the morning of the 23rd (day 5), I added some ethanol/brandy/grappa to about 80 pounds of the Cabernet to stop the fermentation process halfway, with the hope (fingers crossed) of making Port. The rest of the must fermented for 10 days, and then were pressed at around -1 Brix on 9-28. 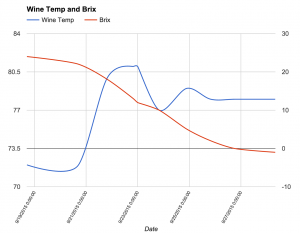 I had better scheduling expectations this year, and was able to provide better notice for help.  Ben, Dasha, Shae, Colin, Brittany, as well as out of town guests Mike and Michelle helped Leah and I.  It was a ton of work like last year, but I think we knew what we were doing.  We started around 6:30 and were done around 10:30pm, and then Brittany and I cleaned up until midnight or so.  Special thanks to Brittany for helping clean up late (though she was sleeping over, so likely didn’t have too much of a choice).

One snafu to note.  My side project muscat grapes were a disaster.  I only had ~20 pounds, but accidently pressed the grapes into the sanitation solution rendering both of them useless.  I had to chuck it, which was unfortunate.

The final tally is that the yield was considerably more than last year.  I have 15.5g of Merlot, 68.5g of Cab, and 8.5 of Port.  Of course, 5-10% of that is going to be discarded in the form of lees, but I’m cautiously optimistic that each member will get slightly more wine this year!

I pitched malolactic bacteria at the 24 hour mark after pressing.  The airlocks have been percolating ever since, so I’m hopeful that this is working so I really have no way to tell.  Apparently, it should take 3-4 weeks to run through all the malolactic acid.  At that point, I’ll rack all the wine, discard the gross lees, dose with 50ppm SO2, and then leave them.  Subsequent to that, there will be oaking, and perhaps 2 more rackings down the line.  And since there are two varietals, there are blending options as well, though I will likely blend all the Cab and Merlot together.  But that’s it.  The hard part is certainly over, now it’s mostly just a waiting game.

Punching the cap this year was harder with more bins to do.  Worrying that last year’s effort, and 3 day absence, caused the Zin not extract enough goodies from the skins and thus be underly colored and tannic, I put more oomph into it this year.  I also tried to scrap the bottom once a day or so to ensure full rotation of the liquid around the vessel.  Time will tell if that mattered or not.

I was able to effectively separate the free run from the press run for the Cabernet (kegs #2 and #4 are currently free run Cab).  That should ultimately leave 31-41g worth of free run (depending on blending options).  Those that helped the most recently, will get first dibs.

The following are some internal notes, observations and experiences to help in future pursuits.  Read at your own peril.

9/17 – I went to the vineyard at 7am before work and picked up 240 pounds. I wanted 300, but settled on the lesser amount. The bins will filled to the top, and it was interesting that they settled another 30% down through the rest of the day.  Next time, fill higher than the lip of the bin. It was really a lot more work than I anticipated, and I was in the vineyard longer than I wanted too.  I paid $204 and was on my way.  The four, 17 gallon storage bins fit in my car reasonably well; I couldn’t do five, but I could have added a couple of buckets.

I brought all the bins up to the office at work to keep them cool (though it was cool outside), and then brought them down to my car when I left.  At home, I cleaned up a bit and started destemming.  I spent about 5 hours, and Leah pitched in 2, so 7 hours to get 240 pounds destemmed, yikes!  I strung some chicken wire on the surface of one of the bins, and rubbed the clusters on it and the grapes popped off.  Through the process I found that more and more clusters during the rubbing was best.  I got better at it, and at the end, I figure that I could do 100 pounds in 2 hours.  After the destemming, I crushed the grapes with my feet.  This was much easier (15 minutes?) and was really pretty fun.  I dosed the must with 50ppm SO2 and went to bed.  Long day.

9-18 Today was delivery day.  Leah reserved a truck which we picked up and drove to Oak Barrel.  I had previously given them my bins (3 big fermentors, 2 buckets, and 2 storage bins).  The extra capacity was key in decreasing the overall weight of any single container.  We put it in the truck and took it home.  Ben came over and brought a piano mover which was helpful.  We got the containers off the truck, and into the living room fairly easily.  Oak Barrel added the SO2, so that was it for that day.  The measurements are 24.5b, 3.22 pH, and .76 TA.

I consolidated some of the containers. I poured the storage bins into the big fermentors to save on space.  I then pitched the yeast, D80 (6g/100lbs), and did a punch down.

On day 5, I put ~40 pounds (~4g) each into two separate buckets.  The Brix was roughly half at 11 at the time.  I poured about .6 gallons of ethanol into each bucket.  This will raise the ABV significantly and effectively make the yeast ‘go to sleep’ and retain some desirable sweetness.  I was thinking I’d get 6.5g of output (5.3g of must, 1.2g of ethanol) which would yield 20% abv.  The final output was 8.5g implying the must part was actually 7.3g or so which means the current ABV is 18%.  I think when I weighed out the must, I unfairly took too many skins and not enough liquid.  As a result, I should add .3g more ethanol to the Port to get to my desired 20%. 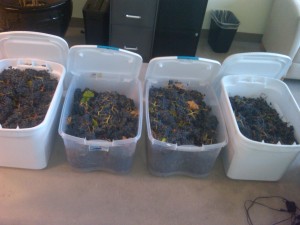 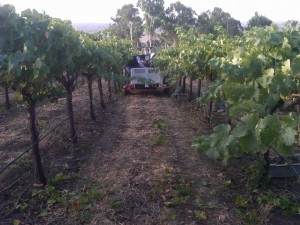 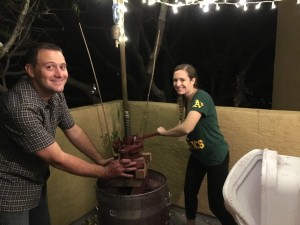 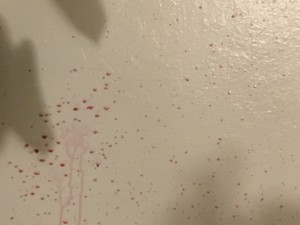 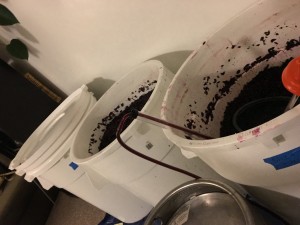 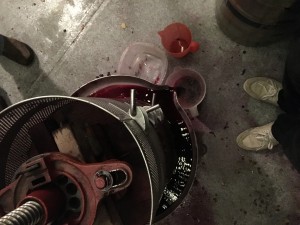 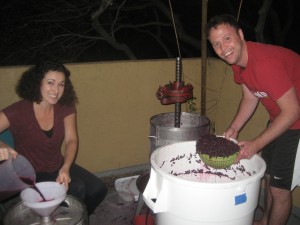 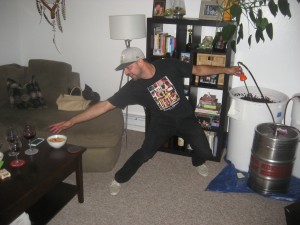