The apartment is still a mess from the bottling we did just 4 days prior, but so begins another year of wine making. I decided to go with the Merlot again this year, using the same vineyard that I’ve used twice before, Thatcher Bay Vineyard. The difference is that I’m using this as my primary wine, not my secondary bonus batch. And a big catch with that is that I need to crush the grapes myself.

I’ve been planning this for a while, and the key to this is using my Mom’s car, and filling them with as many storage bins as I could. I have four, and I asked my parents to purchase 9 more of these, and 5 smaller 32 gallon ones. I was targeting being able to fill 1000 lbs of grapes both in these bins and in the car …. I hope my math is right.

October 4th – Harvest Day
I got to call from the vineyard, the grapes are going to be available on this day. I arranged the car with my parents, and drove over there to swap cars. Bonus this year, my cousin Mike is in town and he decided to go with me for some muscle. I intended on using the front seat for two bins, but it turns out everything fit in the back area anyway. So we got to the vineyard around 9:30am and Scott already had a pallet of picked grapes (1048 lbs) ready for me to take. All I had to do was scoop the grapes out of the bin and drop them in my bins, which went pretty fast. 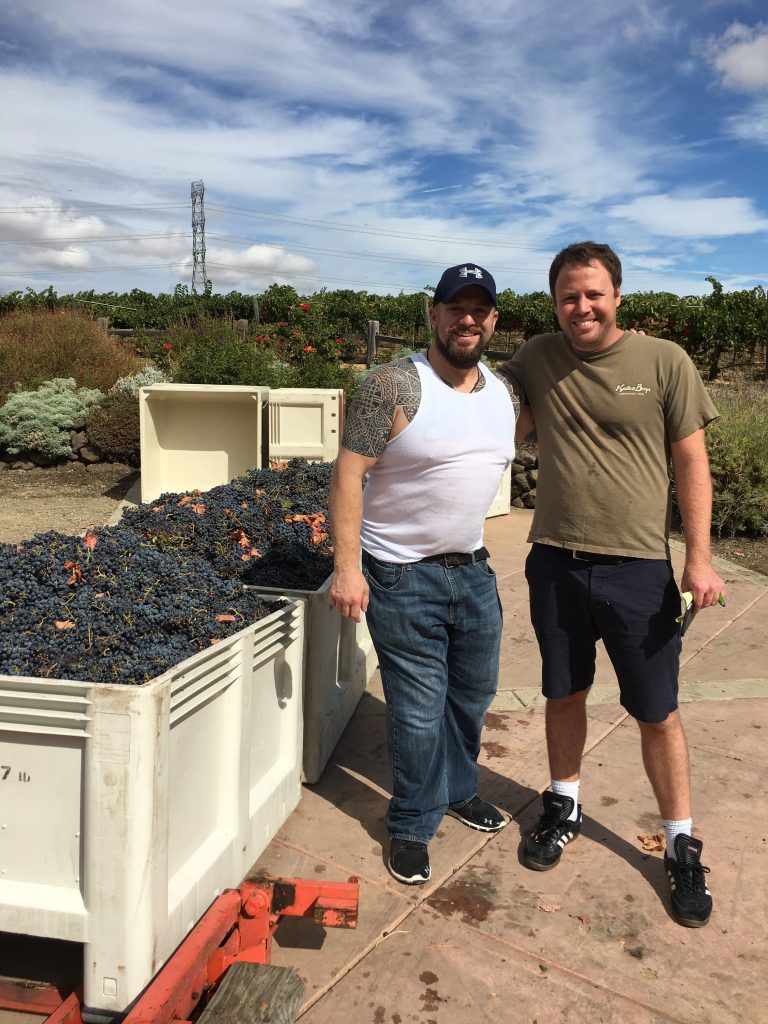 Mike and I loaded them carefully into the car, and we were left with one empty bin and 2 buckets. We then went into the vineyard and filled those up with slightly underripe cab with the intention of blending it. This picking sucked, it took longer to pick 102 lbs, than the transfer the 1048 lbs of Merlot. But we finished, paid up, and drove back to my apartment. 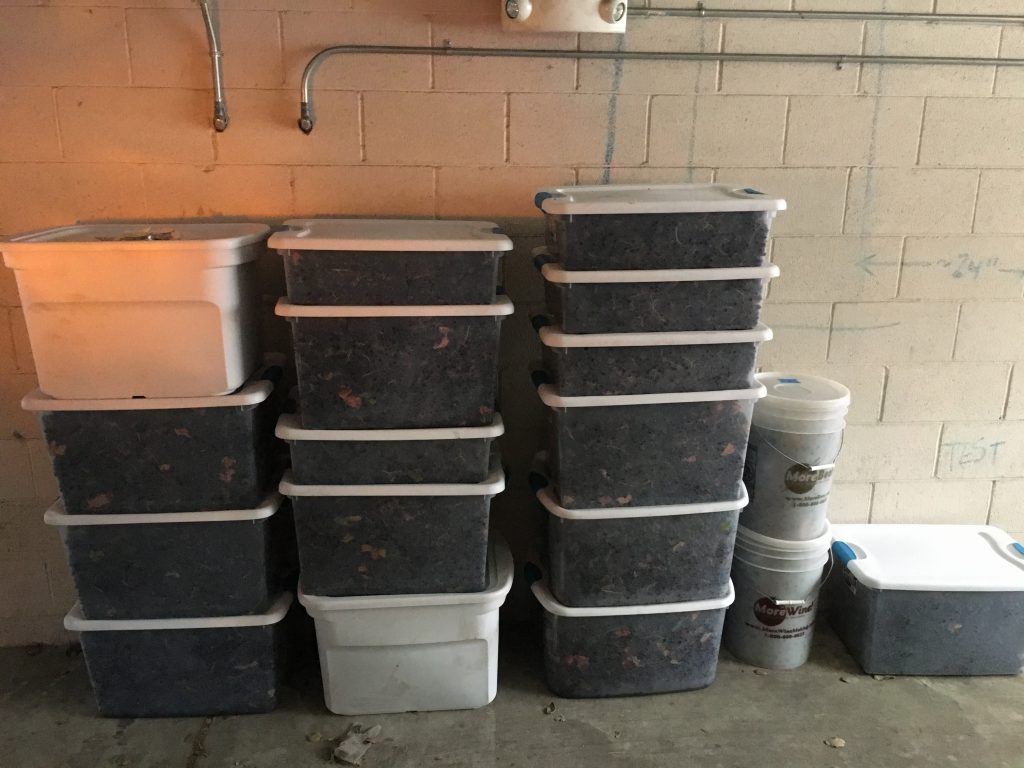 We dropped the bins in my parking spot and went to Oak Barrel to pick up the rented crusher destemmer, which was pretty large and heavy. My dad met us back in my garage and the three of us proceeded to figure out what to do. The bottom of the crusher destemmer is where the crushed grapes drop out of, and we found the square bins caught everything much better than the round fermenters. So we’d fill those up and then transfer them to the larger fermentors from there. The stems were spit out of one end, and it was amazing how fast they were processed, especially juxtaposed against my experience of manually destemming them in years prior. The crusher destemmer was messy, and random berries were flying all over the place. At one point, we missed catching the output, and I picked up the berries and juice from the ground of my parking space, but I just took the top layer. All in all, the crushing took less than an hour, it was really fast. The cleanup was almost as long. My dad helped a ton by hosing off the bins in my backyard while Mike and I carried all the must upstairs. We then cleaned the crusher destemmer which wasn’t super terrible. We drove the equipment back to the shop, and I siphoned off 6 gallons of juice to make rose and pitched yeast there. 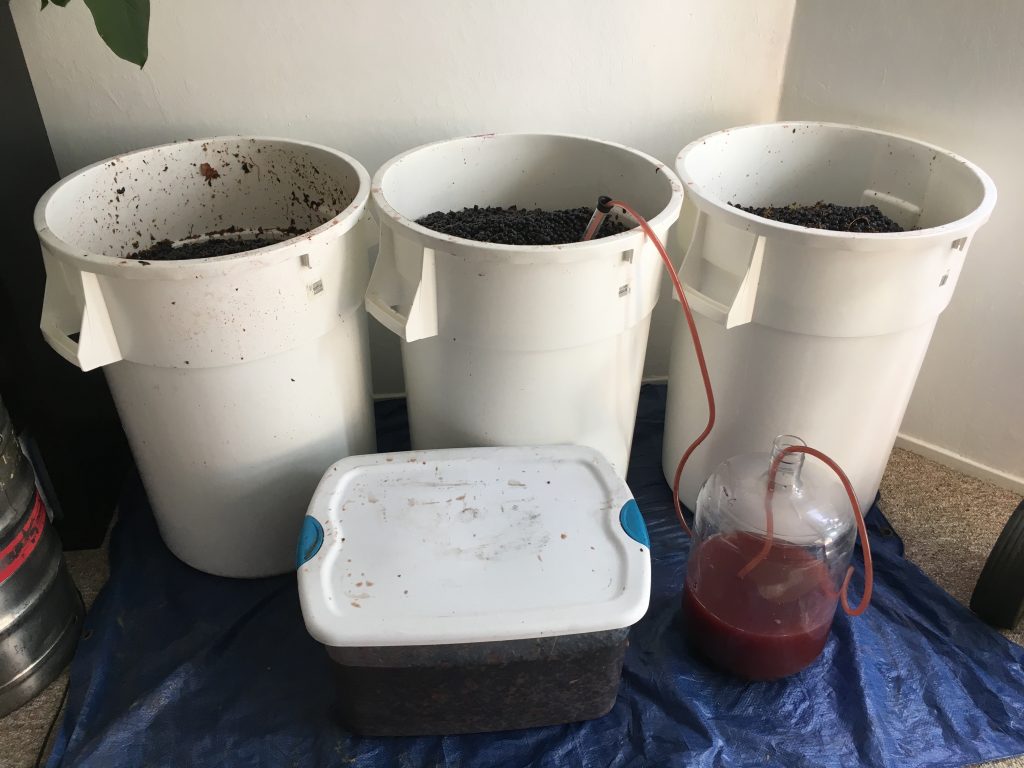 Bonus Wine – Sauvignon Blanc
I almost forgot, Oak Barrel offered Sauvignon Blanc this year, and had some extra that they didn’t sell. Homer gave me a very good price on it, $50 for a 6 gallon carboy (it’s probably worth $130). They came on September 10, and I picked it up on the 15th. The yeast was already pitched and it was already fermenting. I gave it a week, and it fermented completely to around -1.5 (phew!). I racked it into a clean carboy and it’ll sit for 3-6 months. It was sampled at the previous bottling party and people seemed to like it!

My goal for the night was four kegs, one carboy, and one 1 gallon bottle. But we went well past that. After filling four kegs and decreasingly sized containers, it was apparent that we’d be able to fill the ever elusive fifth keg. And we poured all the smaller contains into it. So I ended up with 5 kegs total. I sprinkled some malolactic bacteria in the kegs and closed them up. Then I cleaned up with some help, and drove the press back to Oak Barrel. A further win was that we were able to get ride of all the solid pomace waste. It really seemed that there was more liquid, and less solid in this years pressing. 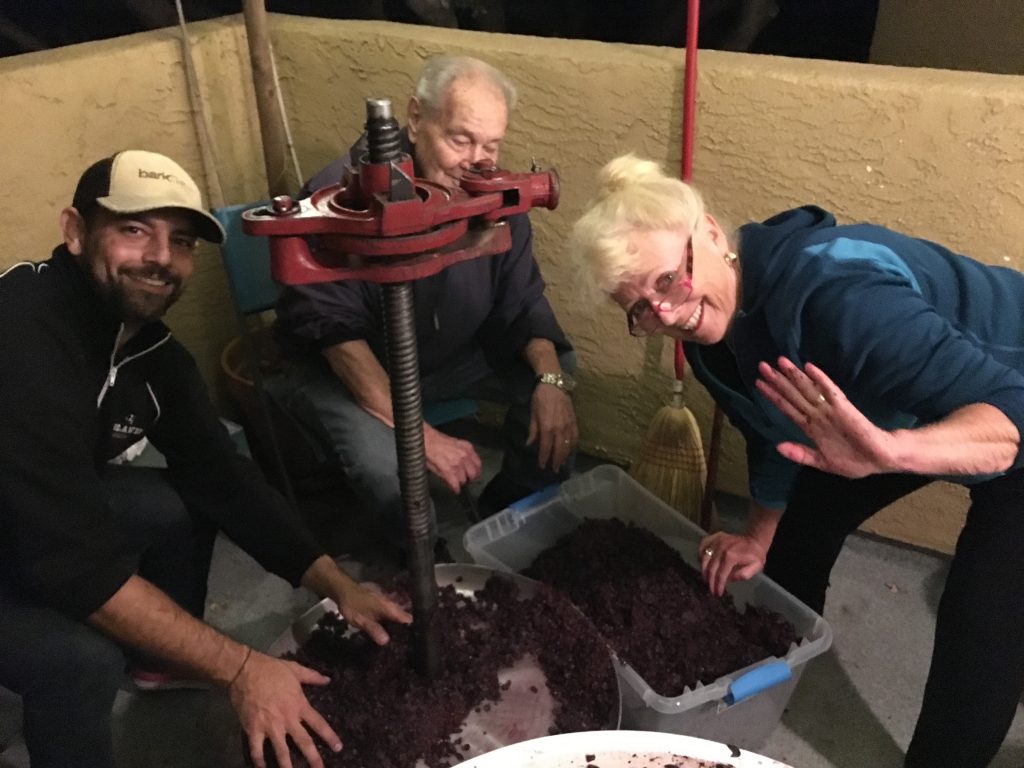 October 27 – Racking I waited a week or two, and am now racking the gross lees. I’m in bit of a pickle in the sense that I don’t have one carboy to collect the dregs to settle. It’s makes things surprisingly harder. But I settled on a multi-step solution that isn’t too much of a pain. Step 1 I racked the “top” of #5 into a 6 gal carboy, and the rest into #6. I then cleaned and racked every keg into the next higher one. And I poured the dregs of everything into #6. I then used the 6 gal carboy to top all the kegs. This was the normal difficult “3 hour” racking, and resulted in kegs 2-5 being “clean” and 6 being “extra dirty”. Step 2 A few days later, I racked #6 into 3 different carboys, with the last being the dregs. Step 3 . I let the carboys settle, and then racked them back into a cleaned and sanitized #6 taking care to “leave” the lees on the bottom. I was surprised that there wasn’t a ton of lees at the bottom. I topped off #6 with three bottles (1 merlot, 2 syrah) of older wine, so presumably, that is all the volume of lees that I removed from the entire situation. So effectively, I racked:
#1 -> #2 – Free Run
#2 -> #3 – Free Run
#3 -> #4 – Free Run
#4 -> #5 – Press Run
#5 -> #6 – Press Run

Additionally, I measured the SO2, and found they were about 10-15ppm. So I added ~40ppm to all, and packed them back into the second bedroom for long term storage. I am now done for a few months.

Rose Update: I tasted some rose a couple weeks ago, and found it was sweet to the taste. (This was well after the main wine was fully dry). I measured it then and it was around 1B. I measured it again today and it was 0B. Hopefully it will get to fully dry, and it’s just going slowly. If it doesn’t, at least I only have 5 gal of it!

February 23 – Rose and Sauvignon Blanc Bottling
Today was the day for the non-core Merlot bottling. The SB has been hazy in recent months, and I’ve taken steps to remedy that, to little affect. I tried to cold crash it. I emptied my fridge, and took out the shelving and cabinets and put the carboys in there. This was actually a lot easier, and not as inconvenient as I thought. I left it for a week, hoping to settle out particles, but I couldn’t tell a difference. Second, I added bentonite; this seemed the least aggressive and gross thing to do. I rehydrated the bentonite and tried to stir it and let it sit for a couple hours. I then poured it into the SB and rose. It seemed like a lot to pour in there. I then gave them another weekend of cold crashing. As it got to today, it didn’t look a ton different, but I wanted to be done with these. It came to 25 bottles of each. I labeled them, and put them away to give out at the wine party in a couple months. Hopefully they taste good!

March 8 – Racking #2 I racked all the Merlot tonight. The logistics were a bit easier than last time, thanks in part to that experience. I put 2, 3, 4, 5 all into the keg one below it, and topped off with the next one in line. As usual, I poured the dregs of all into a carboy. When I got to #6, it was used for topping off previous ones; I then filled two 5gal carboys, and poured the rest into the “dregs” carboy. This all worked out pretty well from a space point of view. It seems that one keg can go into three 5 gal carboys (arrowhead jugs from work). I had to squeeze a bit to clear the headspace. Now, I wait a few days and (a) put the two clean carboys into #5, (b) siphon carefully the settled “dregs” carboy and (c) top off the keg with Syrah, presumably the amount of lees left in the dirty carboy. This was a two step process, easier than what I did last October.

I measured the SO2 in two kegs, and they came to be about 20ppm, so I added 30ppm SO2 to all of them. I also tried to solve my carbonation problem. I racked using the pump, and I ran it on full blast. I had the out end somewhat splash in the container it was in. And I put the in and out in the same container and ran the pump. The point of all this, of course, is to agitate the wine to release the gas. All the while, I could see tiny bubbles flowing in the out end, and they would quickly converge if the motor was turned off. Suffice to say that I got some gas out, but I have no clue if it was 1% of 99% …. the gas just keeps coming!

Now one week later, I racked the 3 carboys into the #5, and needed to top it off with 3 bottles of Syrah (so 3 bottles of loss from lees). There is one problem, the SO2 reading is still coming out as 20ppm, where it should be 50. I don’t know what to make of that. I also oaked the kegs, and added 10 ppm SO2 (because of the oak addition).

August 18 – Bottle Party
Another successful bottle party. Everybody (except two members) showed up, and we bottled three kegs worth. I bottled my own on that day too. Everybody opted for the “next year” blending, so they took home 19 bottles. Kegs #3 and #5 remain for next vintage blending. I filled up a carboy, and put it aside and Steve, Lily, Seth and Veronique bottled theirs a couple weeks later.