Onward to vintage number 5! Here’s the plan: All the previous wine club members opted to defer 17 bottles of last year’s Merlot. And that is currently sitting in 2 kegs in the wine room. I’m getting Cabernet Sauvignon this year. And I’m going to blend that with last year’s Merlot. This should result in around a 60% 2019 Cabernet and 37% 2018 Merlot (and 3% 2018 Cabernet) cuvée. Thatcher Bay sells a less heralded Cabernet grape (but for more expensive than their Merlot), so I’m purchasing that. I’ll do same process as last year, pick up grapes at the vineyard, and then crush/destem them myself. 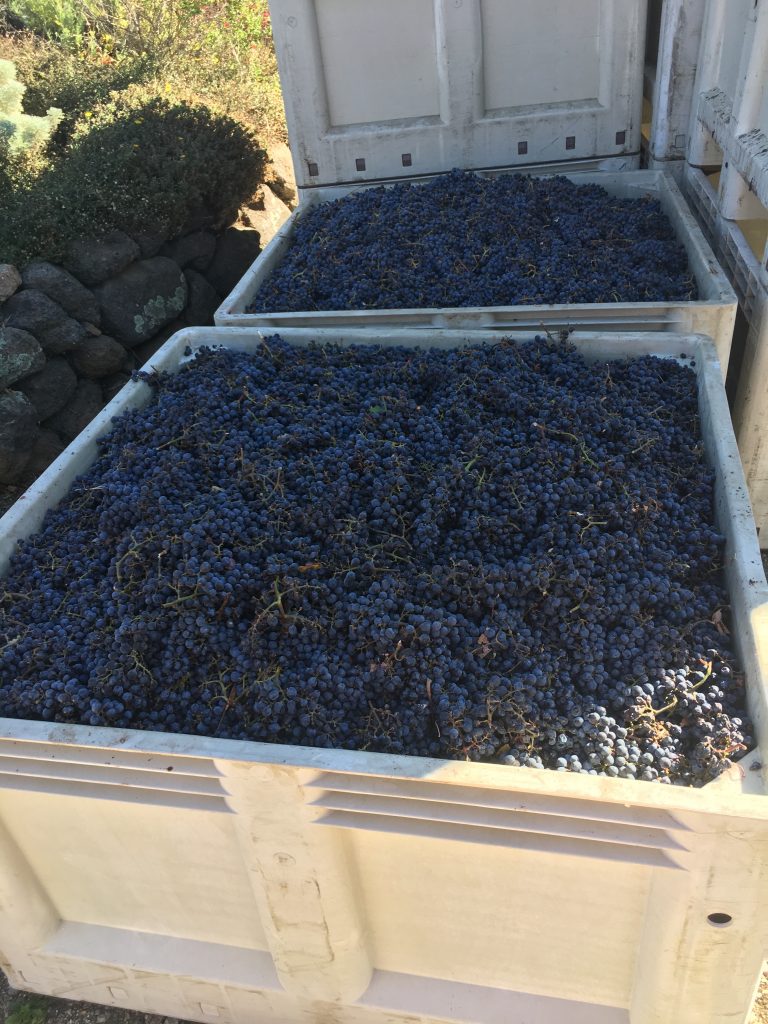 This was by far the latest harvest date I’ve done. I was somewhat nervous it was taking so long! I picked up 787 pounds of Cabernet Sauvignon at Thatcher Bay. Fortunately, my dad and brother showed up to help with some muscle. Scott told me to show up around 11am, and we transferred the pre-picked grapes into our storage totes pretty quickly. We loaded up the car and drove back to Berkeley. Colin, my Dad, and Uncle Rich showed up to help there. I got the crusher/destemmer from Oak Barrel and brought it back. In our haste, we forgot an extension cord (and a shovel for cleanup). But we dodged a bullet finding an outlet on the root above my parking space. 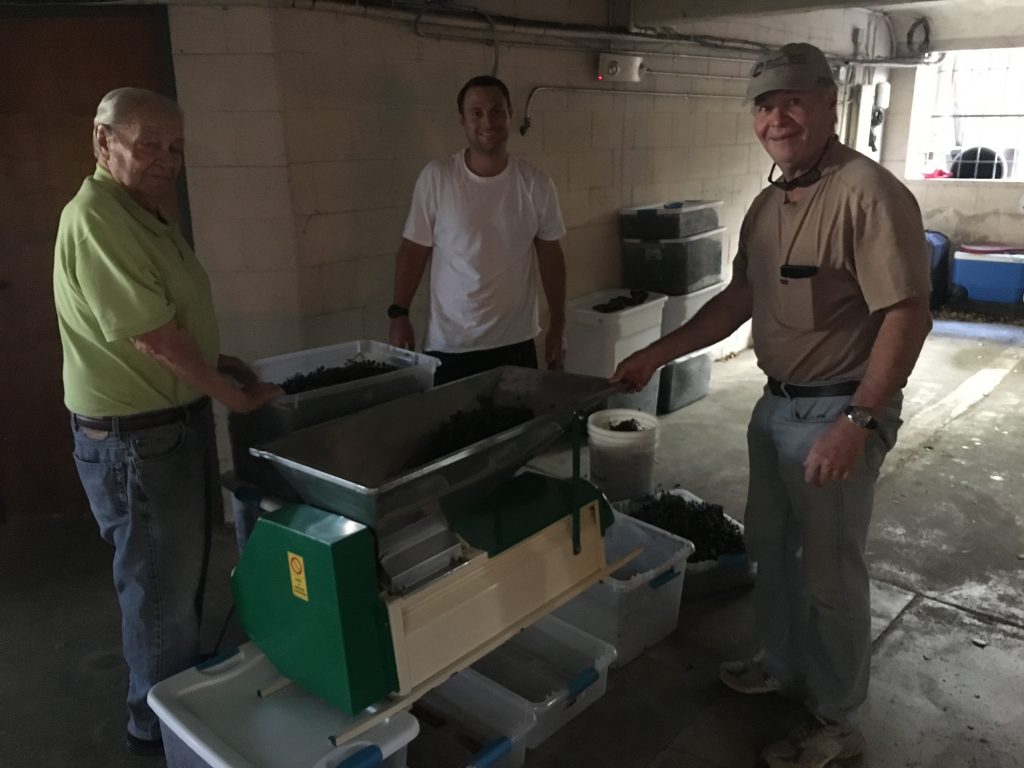 We rested the machine on full totes and put an empty one in the center to collect the crushed grapes. Rather than collected the must there, we carried up crushed grapes and poured them into the larger fermenters. I thought more numerous, less heavy loads was optimal, but damn, that was a lot of weight to carry around. We crushed the grapes from 1:30pm – 3:30pm or so. Colin brought some apples (see below!) and we tried to crush them, but we might have broke a shear pin in the process. We cleaned up (a pain) and returned the machine back to Oak Barrel. It wasn’t totally clean and they made us clean it in the parking lot. After, I pulled 2 gallon from each of the three fermentors into a bucket to make some Rosé. 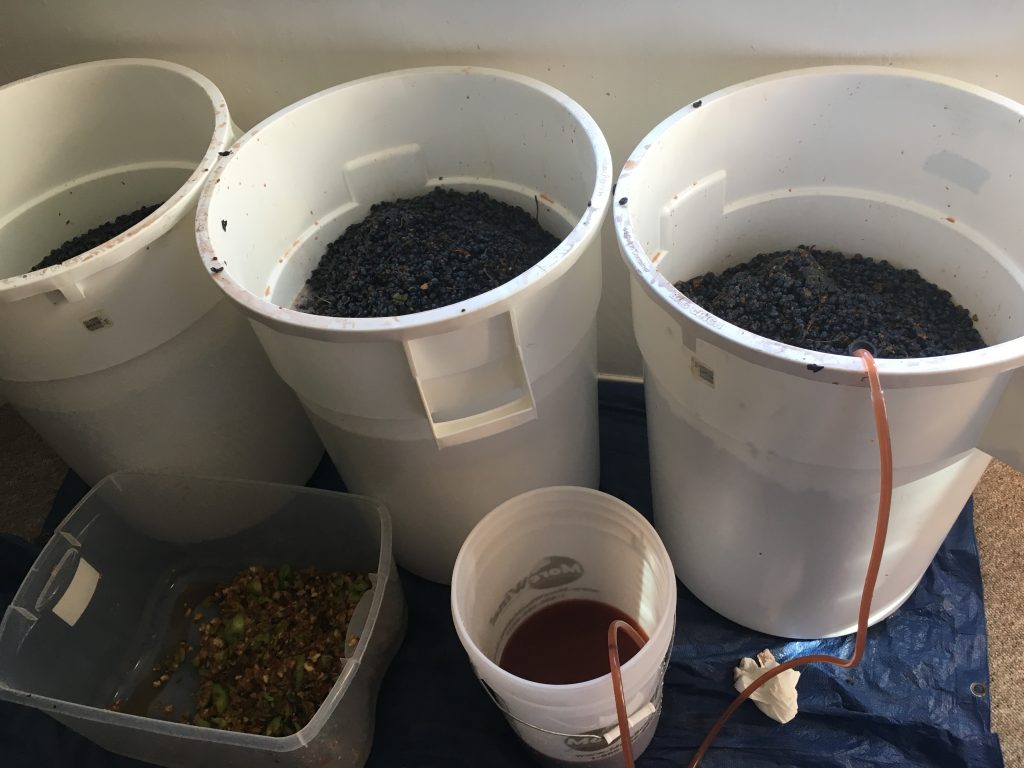 Bonus Wine – Apple
Colin had a ton of apples this year and wanted to make some apple wine. As is the Silla way, he got even more apples from local stores that they were going to toss. All in all, he brought 153 pounds of apples! He cut them up, removing any bad bits. And we blended all the apples. I thought the blending was a little unnecessary, but we did it anyway. It took 5-6 hours to do all this; we were done at 9pm. It was a long day. We boiled 6 gallons of water, along with 20 pounds of sugar, and poured that over the blended apples. We had two different storage totes, and they had initial Brix of 22 and 20, and perhaps 28 gallons of must. We added 2oz of Citric Acid, 1oz of Wine Tannin, 2oz of Pectic Enzyme, and 1tsp of SO2. I added three packets of Lalvin EC 1118 yeast 24 hours later (Saturday noon). 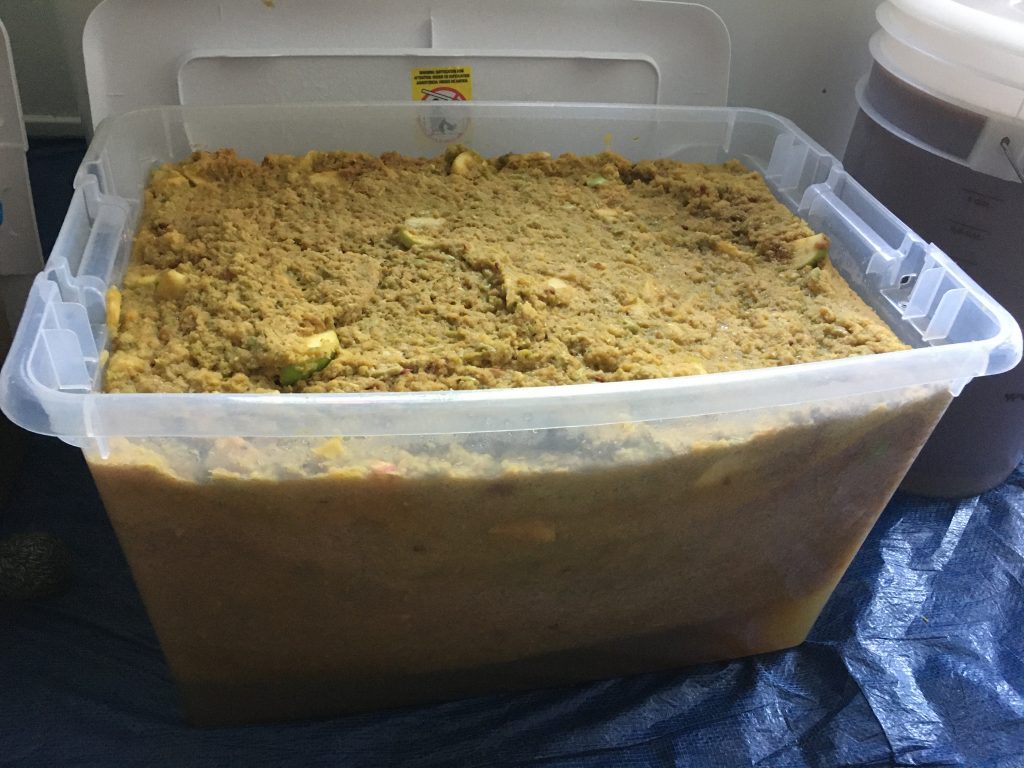 November 5 – Day 12 – Press Day
The wine fermented a bit faster than years past. My parents, Colin, Rich and Seth came over and we pressed all the wine. I learned a slight improvement; after filling the press container, I could hand press the top down and fill it with more grapes. As a result, I was able to do this in 3 pressings, rather than 4. After, Colin hand pressed his apples, since it was too small to fill the press. Also, the apples aren’t done fermenting, but they are still bubbling! All in all, I was again very fortunate that I completely filled the vessels I had available. I’m waiting for my luck to run out, but it hasn’t happened yet! 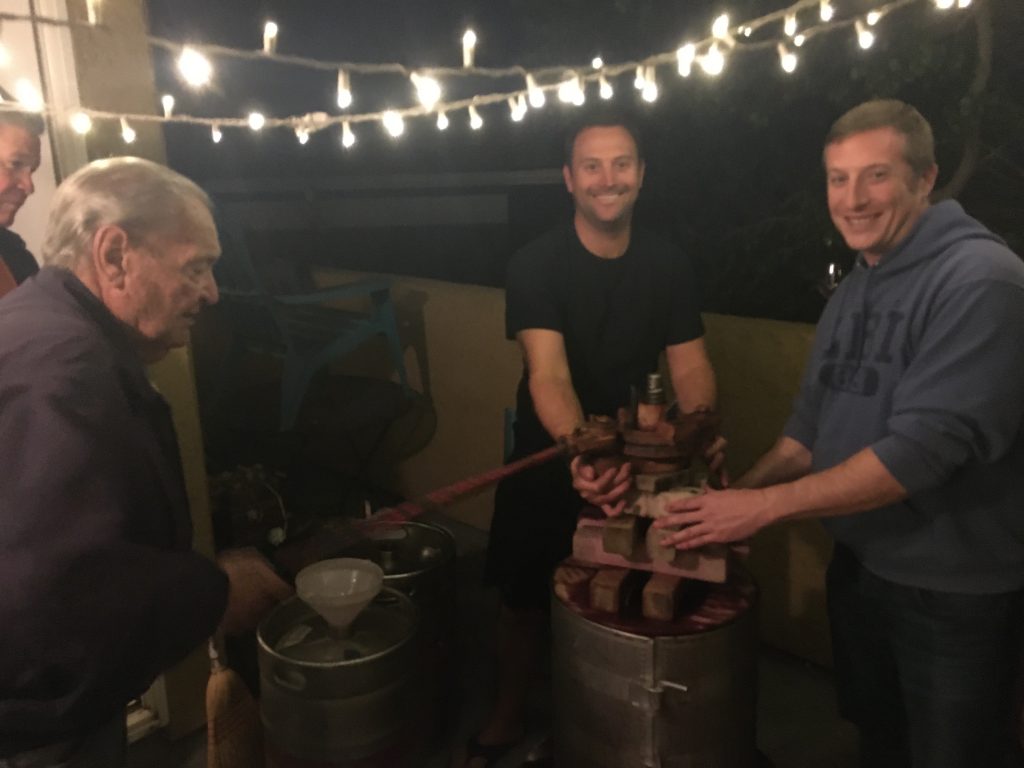 November 9 – First Racking
I’m out of kegs, so I had to get a little creative with my racking plans. I took the press run keg and put it into carboys: 2 full clean, 1 half full clean, and then another that I poured the dregs into. I then put keg 2 into 3, and then 1 into 2. I poured the dregs into the original carboy, and used that half carboy to top off the other kegs. This left me with 3 full carboys (1 very dirty, 2 clean) and 2 full kegs. I’ll put the carboys in the last keg in a few days after the dirty one settles. At that time, I’ll have:

One thing to note: I fully filled 3 kegs at pressing, so I have no smaller vessels to top off. I added 4 bottles of 2017 Zin (the not fully fermented one) into the dirty carboy. The hope is that either (a) 4 bottles blended with hundreds of bottles won’t have any impact and/or (b) the active yeast environment will actually ferment the residual sugar in the Zin. 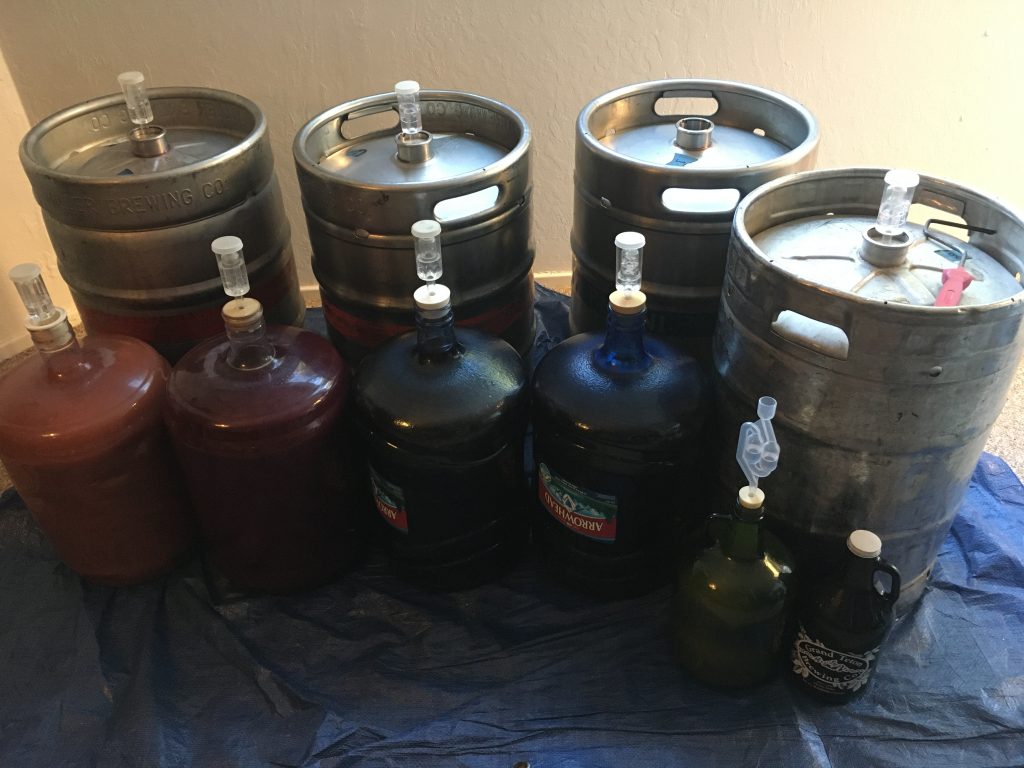 March 12 – Apple Wine and Rosé Bottling
Colin came over and we racked his apple wine, and the rosé. I dosed both of them with 40ppm SO2. I had prior purchased 4 cases of clear bottles for Colin, and some corks, so we were ready to go. The setup was a bit painful, but once we got going, we probably did the whole thing in 1.5 hours of actual filling. Colin and I split up the wine, and allocated a bit for the rest of the club. Additionally, I did an SO2 reading on the rest of the wine. I checked a new Cabernet (#2) and it was at about 35ppm, and one of the older Merlots (#5) and it was seemingly around 10ppm. So I added 30ppm to the new Cabernet and 40ppm to the old Merlot. That should set things for a while until the next racking.

May 2 – Second Racking
I thought this was my third racking, but I suppose it was only my second. Oops!

This racking brought a new challenge. I wanted to do the normal lees removal, but I also want to blend the ’18 Merlot with the ’19 Cab. With 2 kegs of Merlot, and 3 kegs of Cab, that means that I should put 6 gallons of Merlot with 9 gallons of Cab, to get equal blending. Also, the old Cab was previously “clean” since it was racked a bunch last year, so I didn’t bother emptying those and collecting the dregs, I just removed 9 gal of Cab, and put in 9 gal of Merlot. So this is what I have now:

September 27 – Bottling Party
Things are a little different this year with Covid. As bottling is a pretty hard requirement to end the vintage. I decided not to have the bottling party at my place, but do it at my parents’ instead; they have a lot more space than us. But the main obstacle to doing that is getting all the kegs over there! I decided to bottle one keg’s worth myself with Leah a couple weeks prior; no sense in transporting that if it ends up here anyway. And we had two members unable to make it, so I kept another keg at my place to bottle myself and deliver later. That means I had to get 3 kegs to Orinda. My dad helped and drove here with my mom’s car and transporting them wasn’t as big of a deal as I thought. We did this a week before the party and were set to go when the day arrived. 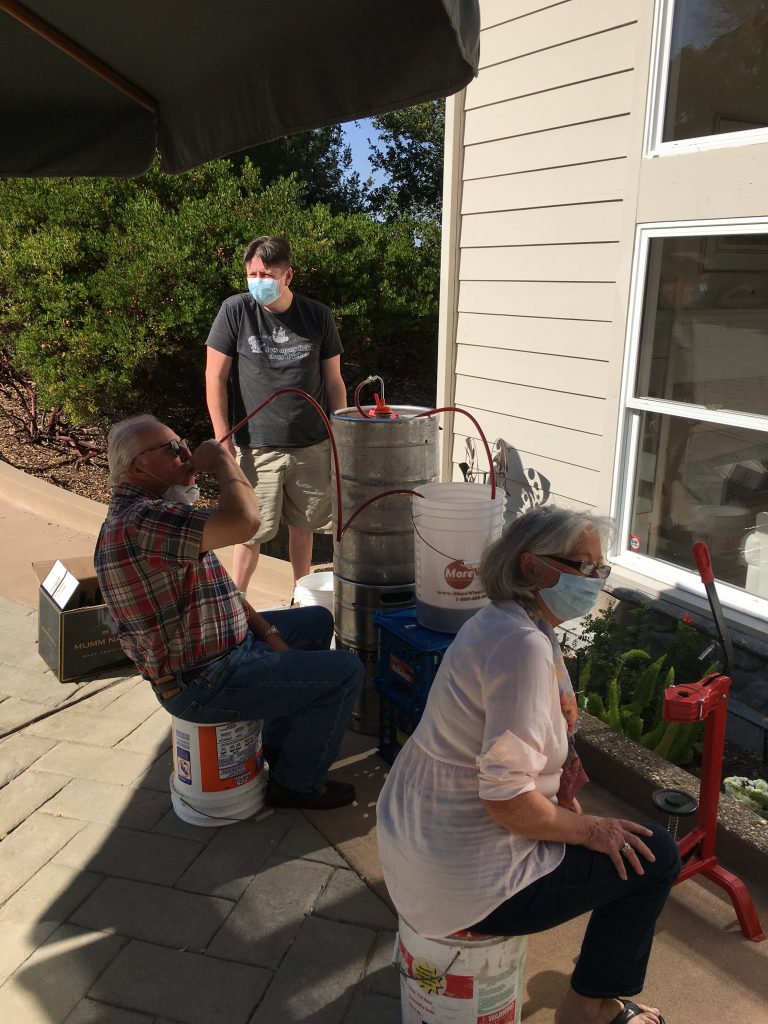 At the bottling party, I immediately dosed the kegs with ~30ppm of SO2. So that gave it an hour to fully spread around which I hope was good enough. We set up seating in the empty garage, and the keg/bottling station near the drain in the driveway. We put a tarp under it to prevent staining the driveway as well. The three kegs were the above 2, 4 and 5, so there were French, American and blended oak options. This allowed people to go through the bottling and get a case of different oak and label their wine accordingly. I haven’t done that in years past. It was also noteworthy as everybody deferred some wine from the previous year to blend with this year, so everybody got 36 bottles! We tasted it at the party, it was pretty good! Leah says our best one yet. There were also no bubbles or carbonation in the final bottled wine, which has been a problem in years past. 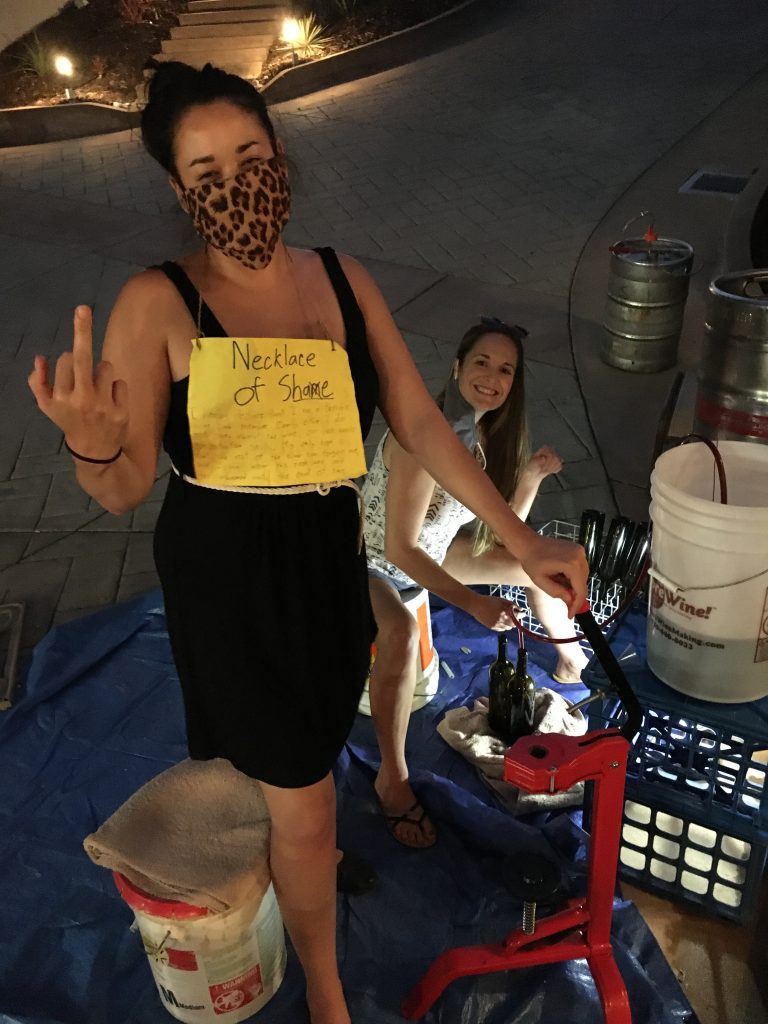 All in all, I had a lot of worries about this day. Moving the heavy heavy kegs to Orinda could have sucked. I could have forgot a key tool at home. The heat in Orinda could have been really bad. We could have been lax on our social distancing and become sick! Fortunately, none of those worries can to pass. The entire day went pretty well. Another great year done! On to the next!