We’re beginning year 6 of this wine making adventure. All the returning members rejoined (either they like the wine, or are too polite to tell me they don’t; I can never be sure). This year, we’re moving out of France, and trying a new Italian varietal, Barbera. And we have two new wine members, so I need to up the volume slightly. So, before diving into the main course of Barbera, I have a small appetizer to start with, Mourvèdre.

September 19, 2020
A couple years back, a friend referred me to the Cal Wine Broker, some guy with a mailing list that brings small wine makers to various vineyards in the Brentwood and Oakley area. His prices are cheap! This weekend, he was offering grapes for 75¢ a pound (picked for you), with no minimum or pricing tiers. I saw a couple weeks ago he had grapes for 30¢ a pound (you have to pick). Wow that’s cheap! Also, he will crush it onsite for a flat $20 fee. I was free this weekend, and it was right before the main Barbera delivery the next Tuesday (so I could press everything together). I had to bite. He offered Montepulciano, Aglianico, and Mourvèdre. Leah opted for the Mourvèdre since that was the only one she recognized. The price on this is low, and I don’t think particularly highly of this region. So, at this point, I’m not planning on blending this with the “seemingly” better quality Barbera I have coming. I’ll keep it separate for months, and then consider blending them at that time. 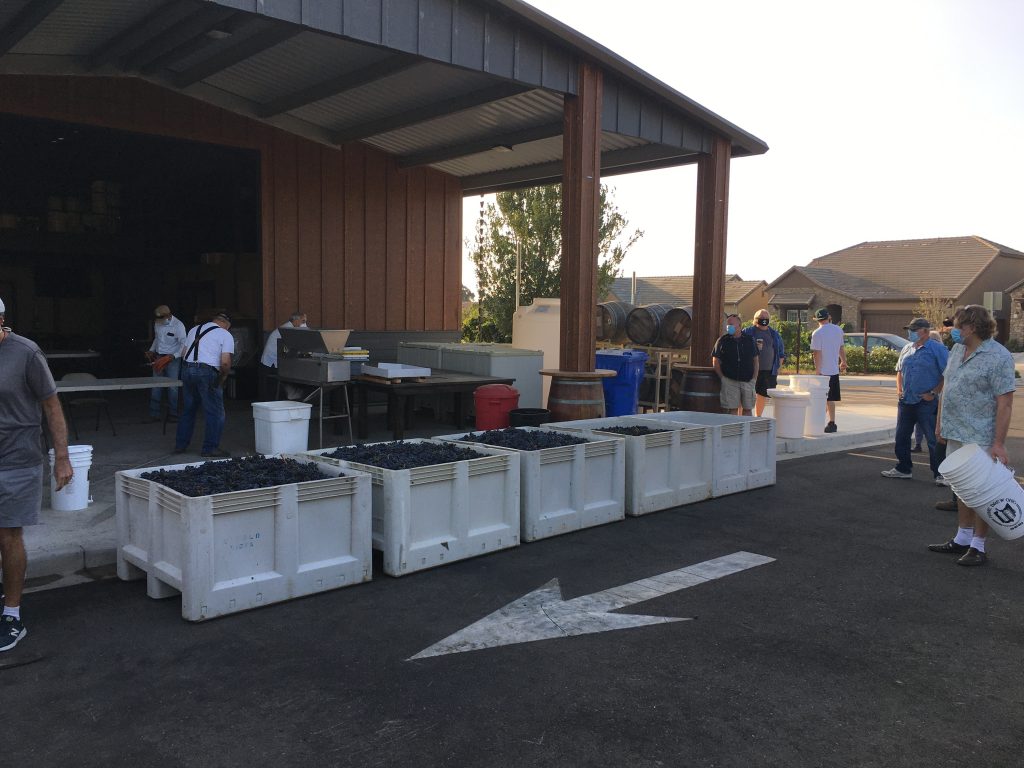 I met this guy at 7:30am in a gas station parking lot in Brentwood, CA with about 20 other folks. We then caravanned to Trilogy Vineyards, a gated retirement community, with a vineyard inside it …. ok. They had 6 big pallets of grapes out in the parking lot and the buyers went at it, scooping the grapes into their containers. Previously, when I did this I just scooped up everything (in Livermore, I would get the whole bin, so I didn’t really have a choice). But the other buyers here were hand picking out the good looking clusters, and leaving the rest, interesting! So I became a little more discerning on what I grabbed. I filled up four of my bins, had them weighed, and he had a crusher/destemmer right there for a small (very reasonable!) $20 fee. I dropped all my grapes in the top and they came out crushed. It was a lot of work throwing around that much grapes, but it only took about 10 minutes. This was a much nicer experience than previous years. It was cheaper, I didn’t have to move the crusher/destemmer, I didn’t really have to move my grapes to get to the crusher/destemmer, and I didn’t have to clean it, $20 well spent! I paid up, loaded up my car and drove home. I purchased some yeast and brought it up to my apartment kitchen. I dosed it with S02 (.5 tsp, I think), and then took a nap! I will add the yeast at the 24 hour mark. 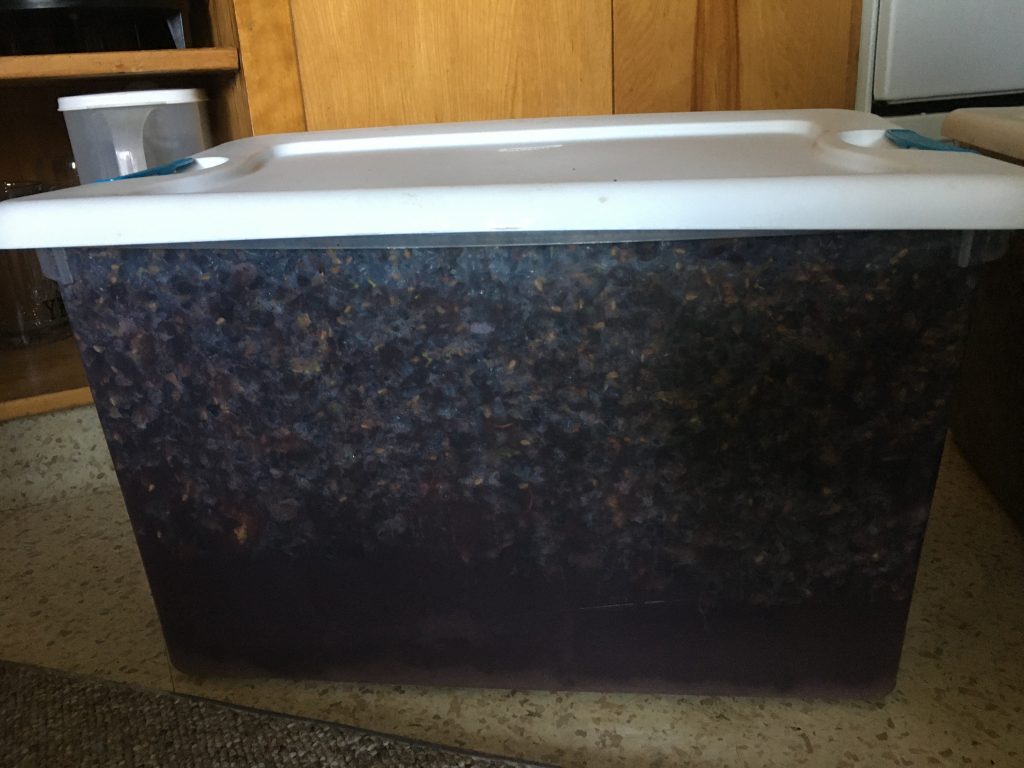 September 22, 2020
I’m back at Oak Barrel after two years out in Livermore. I think the Livermore quality is better, and cheaper, but I wanted more variety, so I picked this. I’m paying $1.20 plus 5¢ to have it crushed per pound. I dropped my fleet of containers off at the shop the day before and picked them up today. I borrowed my mom’s car, and the transport was even easier than I thought. All but one of the tubs fit in the car pretty easily (I went back for a second trip to grab the one tub), and Leah and I could pretty much carry a full one without a ton of effort. We elevator’ed them up and scooped them into the big fermentors. I siphoned off 6 gallons of juice, which was pretty hard. It was so thick, and milkshake-y, that it didn’t really flow. I ended up using a measuring cup to fill up the carboy directly. I added the SO2. I had a ton of dirty tubs, but the cleaned pretty easily in the shower. It was a lot of work, and I’m tired, but none of the work was impossibly difficult. I’m pleased it went well. 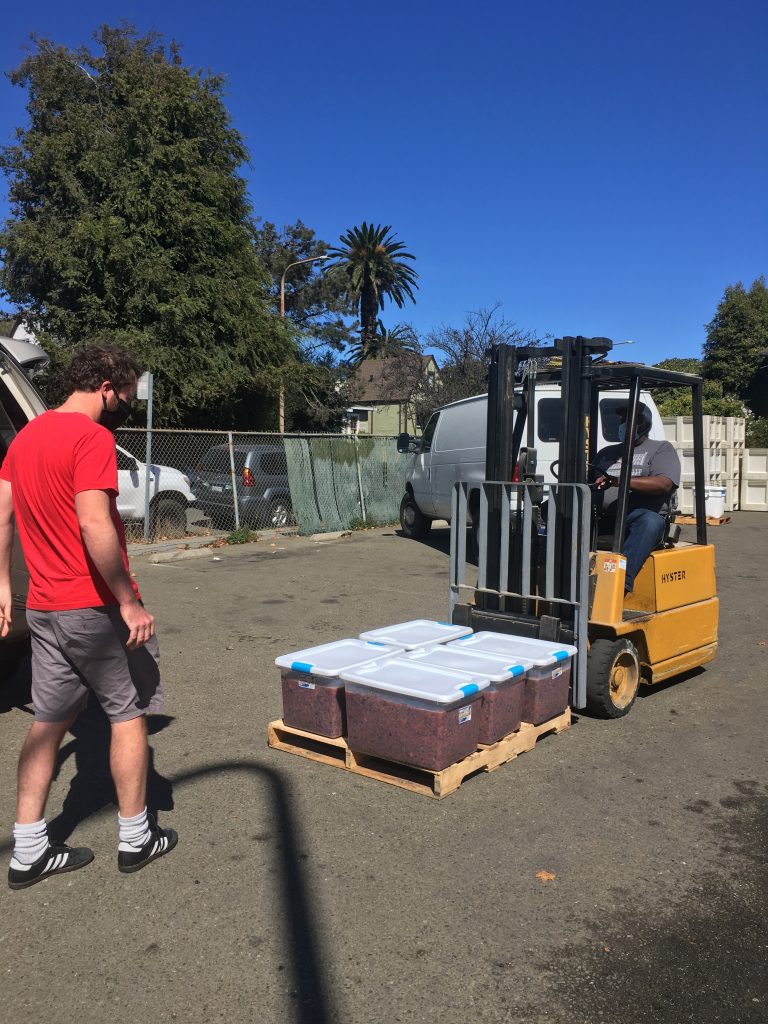 Brix Problems
The sugar content was pretty high on this, which is giving me nightmares back to the 2017 Zinfandel. If the sugar is too high, it will kill the yeast and will result in a stuck fermentation. I need to avoid this. This is disappointing, since I’m paying a pretty high price for this from Oak Barrel, and this happened the last time I bought grapes from them. Officially, Oak Barrel said that the brix was 26.9. My low fidelity hydrometer showed that it wasn’t quite that high, but more in the low 26 range. The solution is to add water, something I did in 2017 and still got the stuck fermentation. Using a Pearson Square, I found that I should add 2.6 gal to lower it by one brix. Oak Barrel recommended a half gal per 100#, so 5 gal. As I thought my sugar was a tad lower, I decided to add 3. I bought spring water from the store, and poured one gallon into each fermentor. I would have loved to take a brix reading, but the water was concentrated at the top, and I couldn’t fully mix it in with the entire batch. My naive reading was 21 or so, but I think (hope) that’s just because it’s so watery at the top. I’m going to say that the brix was 25 … and cross my fingers. 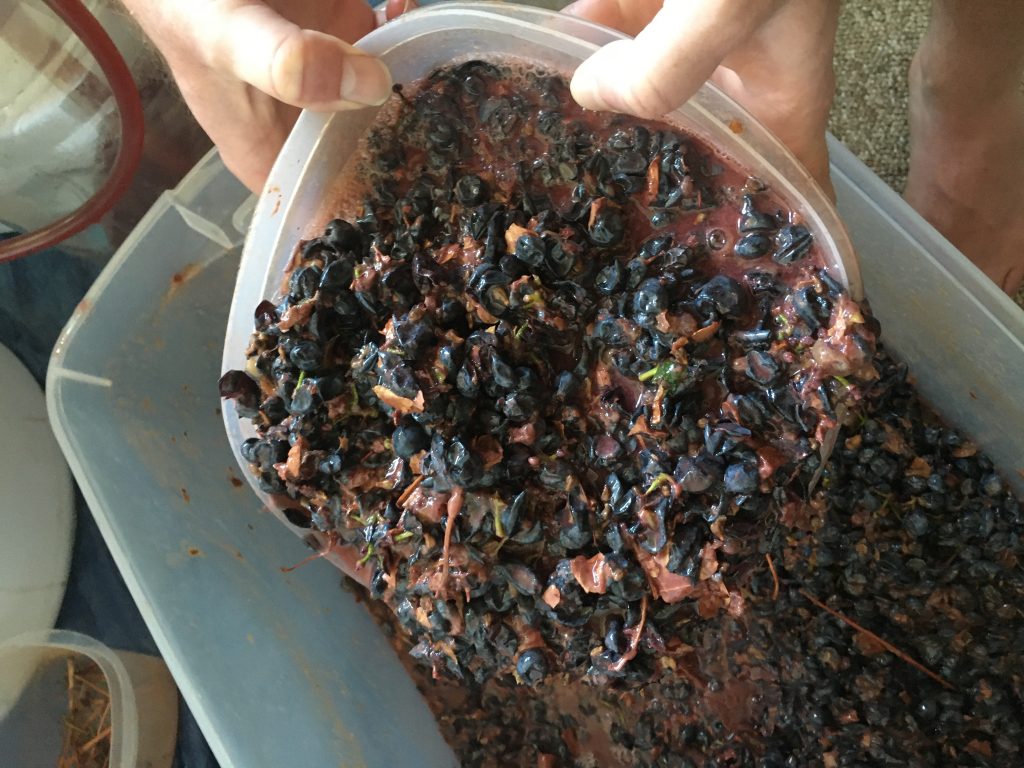 Yeast Rehydration
Given my worries about a stuck fermentation, I rehydrated the yeast to improve their heath and give me better odds. I filled three drinking glasses with hot water and a splash of cold water to get it to about 105F. I then split up the yeast and poured them into the glasses and stirred it up. The glasses were 2/3 full at this point. I waited 15 minutes, then I put some of the juice in the cups. This had the dual benefit of giving the yeast something to eat to further get them up to speed, and lowering the temperature to decrease the temperature difference between the yeast mixture and the must. After another 15 minutes, I pitched the yeast into the must. 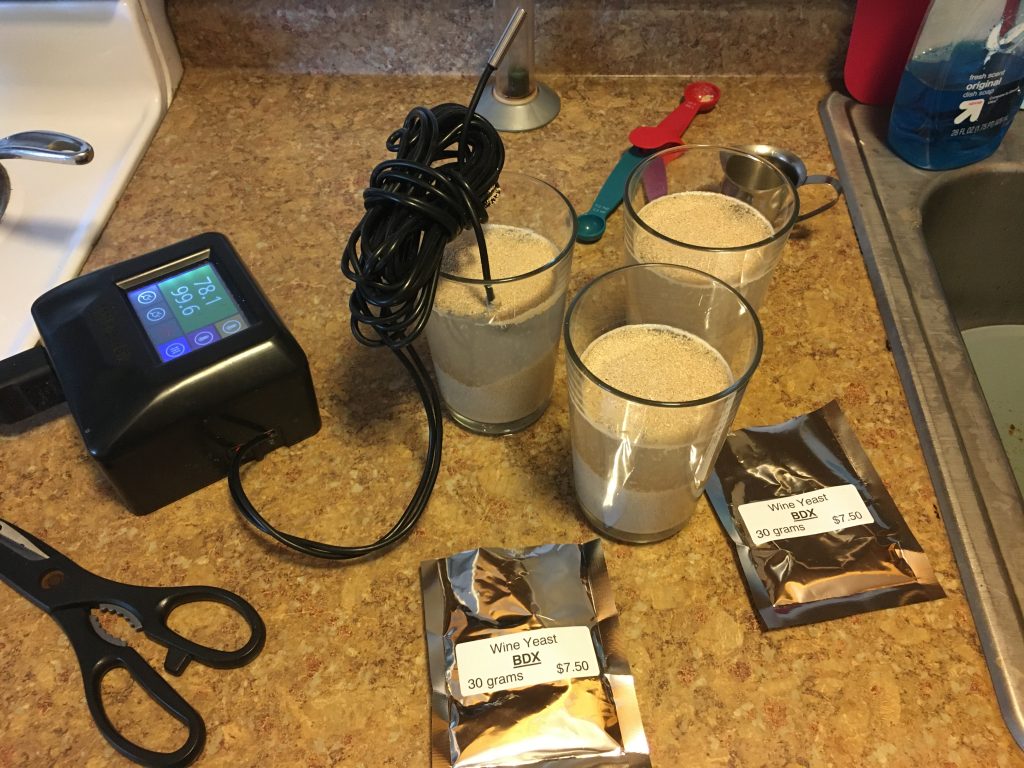 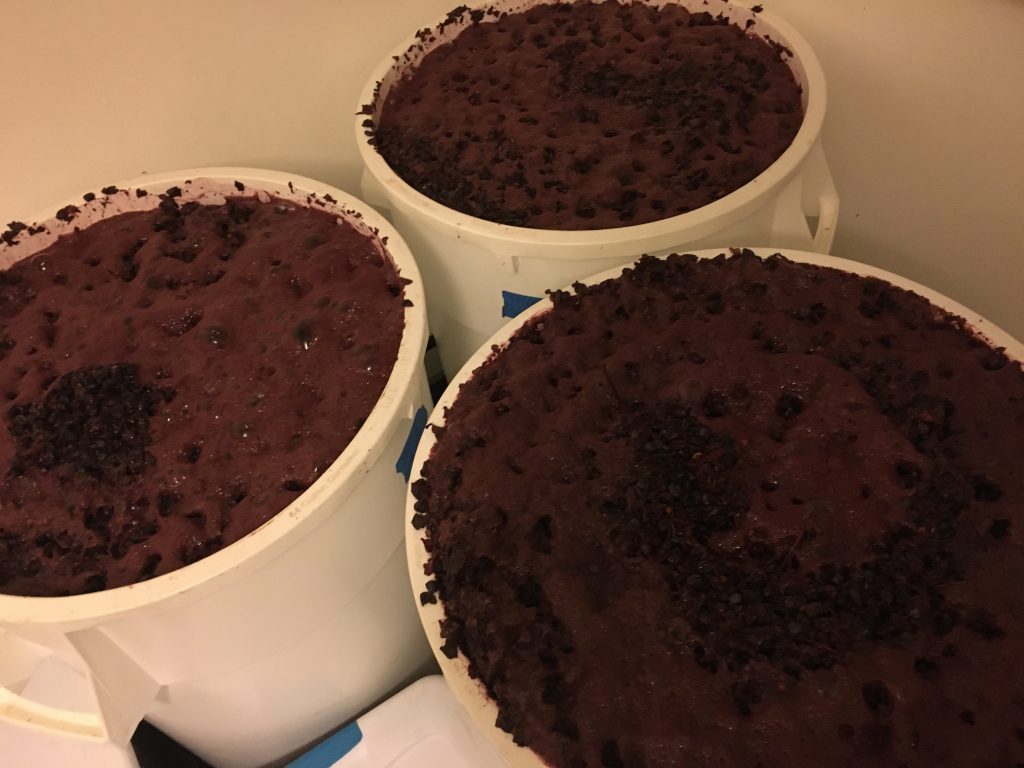 October 1 – Press
With Covid being around, Leah and I couldn’t make this a party like usual. So we had to do the pressing all ourselves. I picked up the press from Oak Barrel and got started around 6(?) or so. This year, I was much more aggressive about siphoning. I would siphon one fermentor into a keg and at some point the levels would equal and it wouldn’t go any more. I would then siphon that same siphon into a carboy and it would trickle out a lot more. All in all, from the three bins, I pretty much filled 3 kegs with just siphoning alone! And what I pressed really only amounted to just one keg, it was pretty dry at that point.

I’ve got the pressing down pretty well. One full fermentor can fully fit in the press at a time. This makes it neat and easy, three fermentors equals three pressings. I did the pressing, and Leah collected the wine. We did a pretty good job, we’re experienced, but we still made a mess. After the three Barbera fermentors, we pressed the Mourvèdre. I didn’t bother siphoning that since those smaller containers were easier to move, and no sense separating it if there is only one keg’s worth anyway. I ended both the Barbera and Mourvèdre with half a carboy each, so in the interest of making things easy. I just blended them together now (I don’t really have 6 one gallon vessels). I also racked the 6 gallons of Rose fermenting in the bucket into a 5 gallon carboy (there was a lot of wasted lees at the bottom). At this point, I have:
#1 Barbera – Free++
#2 Barbera – Free+
#4 Barbera – Free
#5 Barbera – Press
#6 Mourvèdre
carboy (6gal) 50/50 split of Mourvèdre and Barbera
carboy (5gal) of Barbera Rose.

I also checked the brix now if full liquid form. I’m feel pretty good that it fully fermented. I think I can read -1 Brix on all wine, and tasting it was very sweet at all. Hurray! 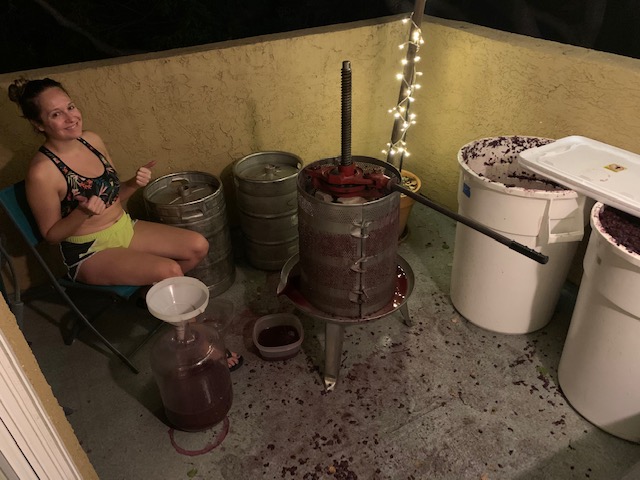 I then topped #3 and #2 with the other Free in #5. Then I topped the rest with the 50/50 carboy. And I collected all the dregs of all vessels into another carboy. At this point, I have all full kegs, and one very dirty carboy. In a few days that carboy will settle and I’ll rack the top of it into another carboy that fits.

I also added 40ppm SO2 to all vessels.