So begins year 7 of winemaking! I recently moved into a house, so I have much more space to work and store things. So I’m looking to level up this year. Specifically, I want to own more equipment and not rent, and I’m going to try to age in oak barrels, not steel. And since I’m increasing the quality of my work, I want a high quality grape. So I’m going back to Thatcher Bay to get their Merlot, which I think I can say has produced the best wine so far!

September 20, 2021
The grapes arrived a week or two earlier than they have with previous years. I got the call ~4 days prior saying the grapes would be ready today. So I showed up with my dad at 7:30am. Scott had 983 pounds of Merlot in a bin that we moved by hand into my storage containers. This resulted in 13 full bins, and 2 half bins, so 70 pounds fit in each bin. I fit all but 3 full bins in my car and my dad transported the rest. It took just over an hour to fully pack all the containers. I could have fit one maybe two more bins in my car, but perhaps not all three. I left with an empty half bin and two empty buckets. I wanted to fill those up too, but Scott didn’t have it ready so I left. 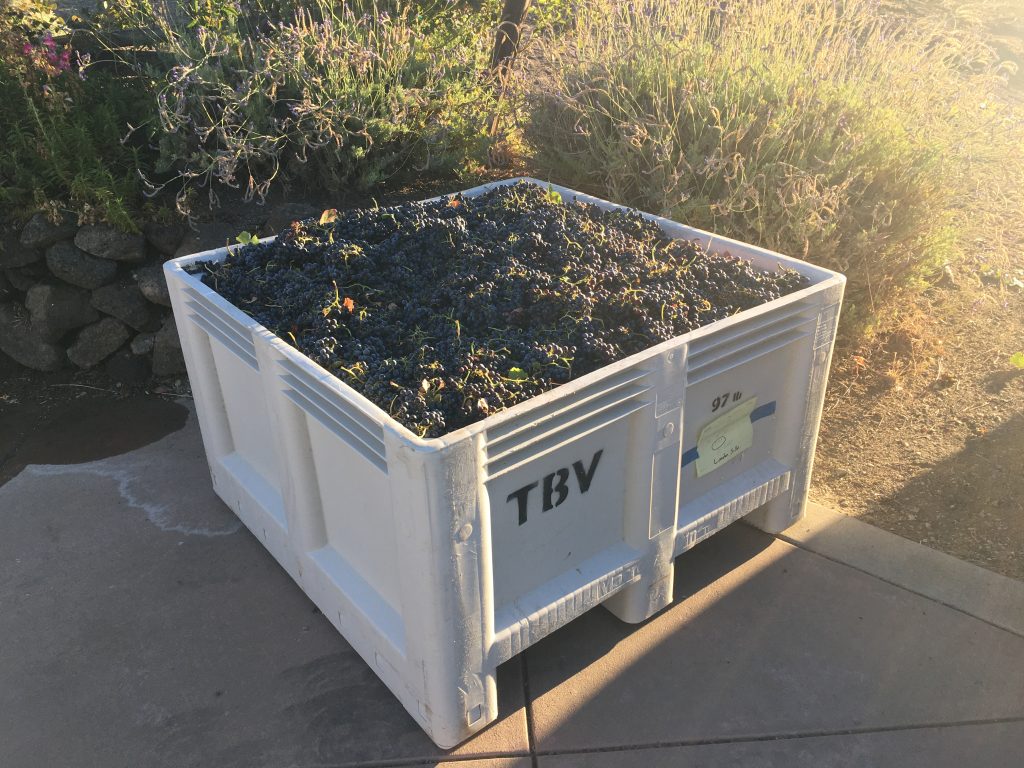 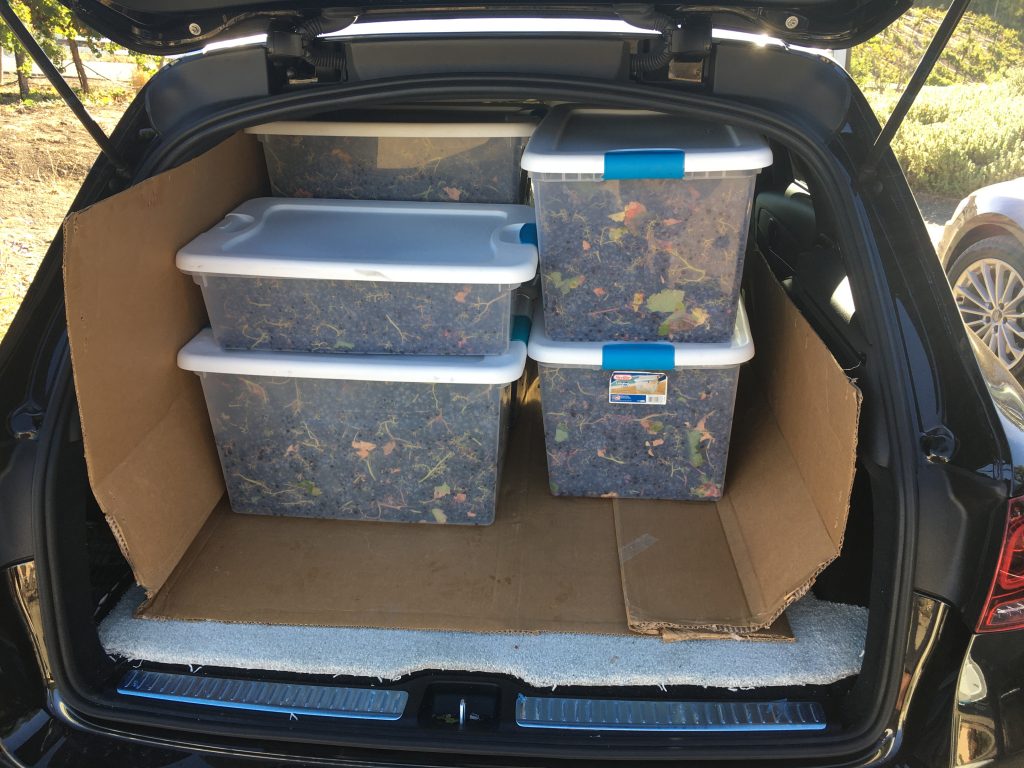 The day before, I drove out to Brentwood to get a Crusher/Destemmer. These weren’t super easy to find. This particular one was manual (boo), but included a chute stand (yay). I set it up in the driveway right by the containers, and my dad, Rich and I went to work. There was a learning curve to get it working efficiently, but we got it down quickly. Here is the process: Rest a container on top of the hopper on its side to slowly drop the grapes to the entry point. Spin the handle to crush and destem. Collect the crushed grapes from the chute while clearing it manually since it gets a little backed up. Also, hand pick out some stems that come through. Twice a container-load or so, open the destemming area and manually remove stems that get stuck in there. Empty buckets into the large fermentor. Hose down ground periodically to prevent staining. That’s it! We started at 10:30 and finished around 1. Cleaning was ok. I took out the blade and hosed down that with the destemmer (in the street!). I think I was able to get 97% of all the stuff of it with a hose. I dosed it with 1.25 tsp per bin right after targeting 30ppm. And I cleaned the containers later that evening with a hose and think I did a great job (I don’t want them to be sticky at all!). 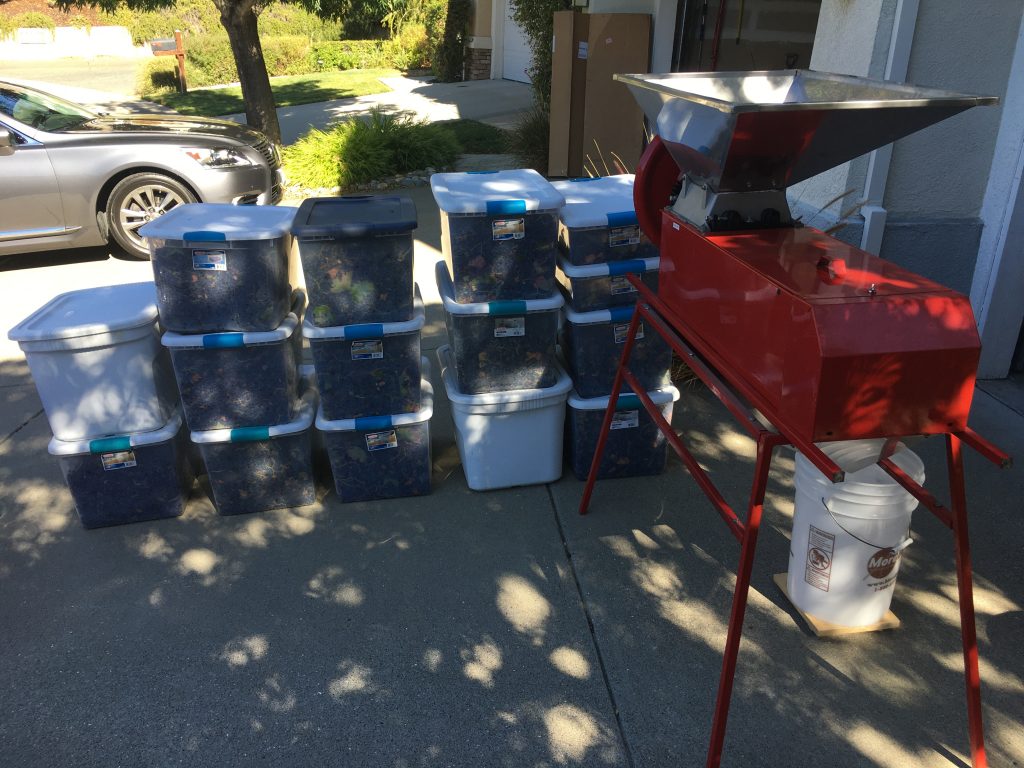 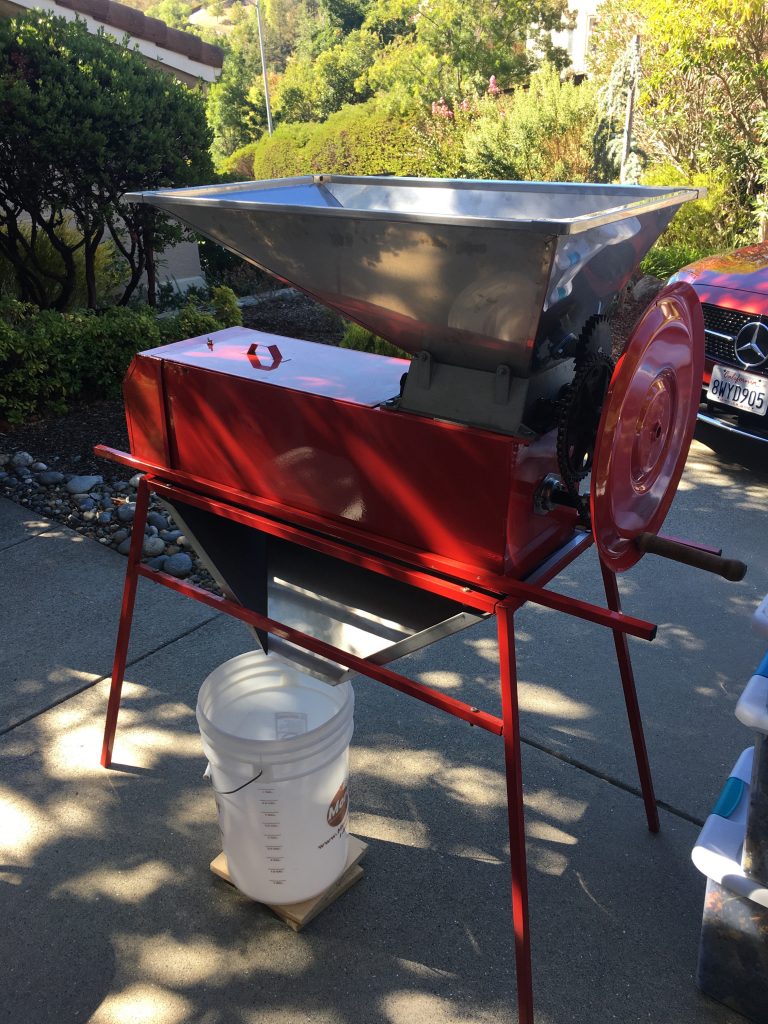 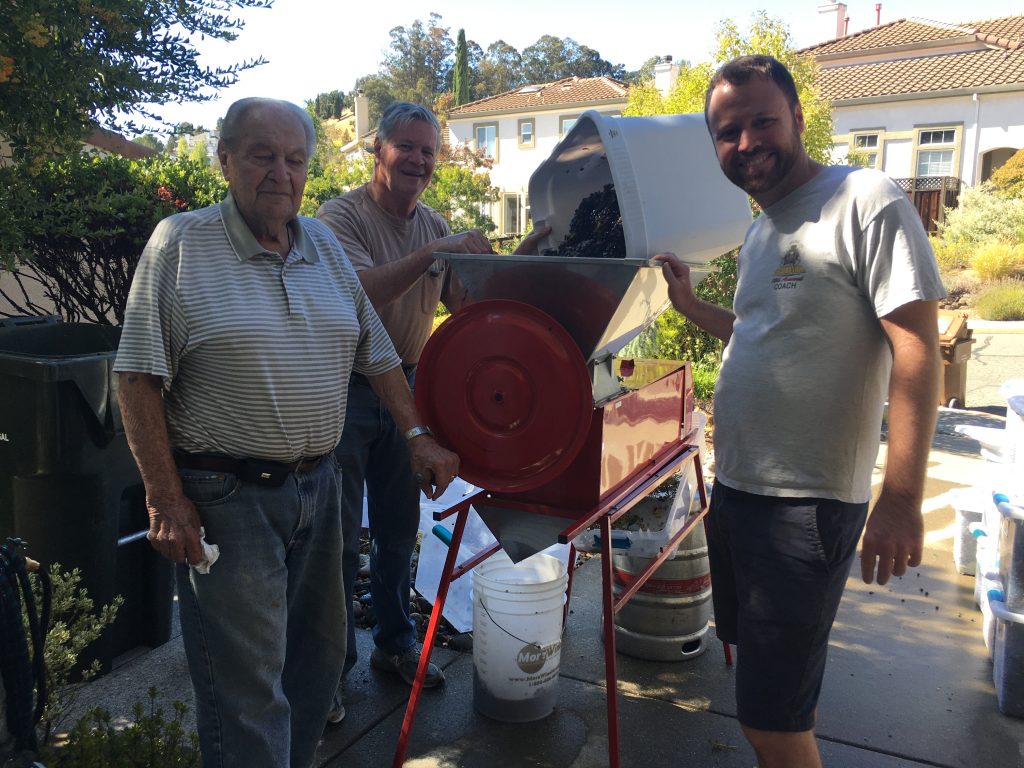 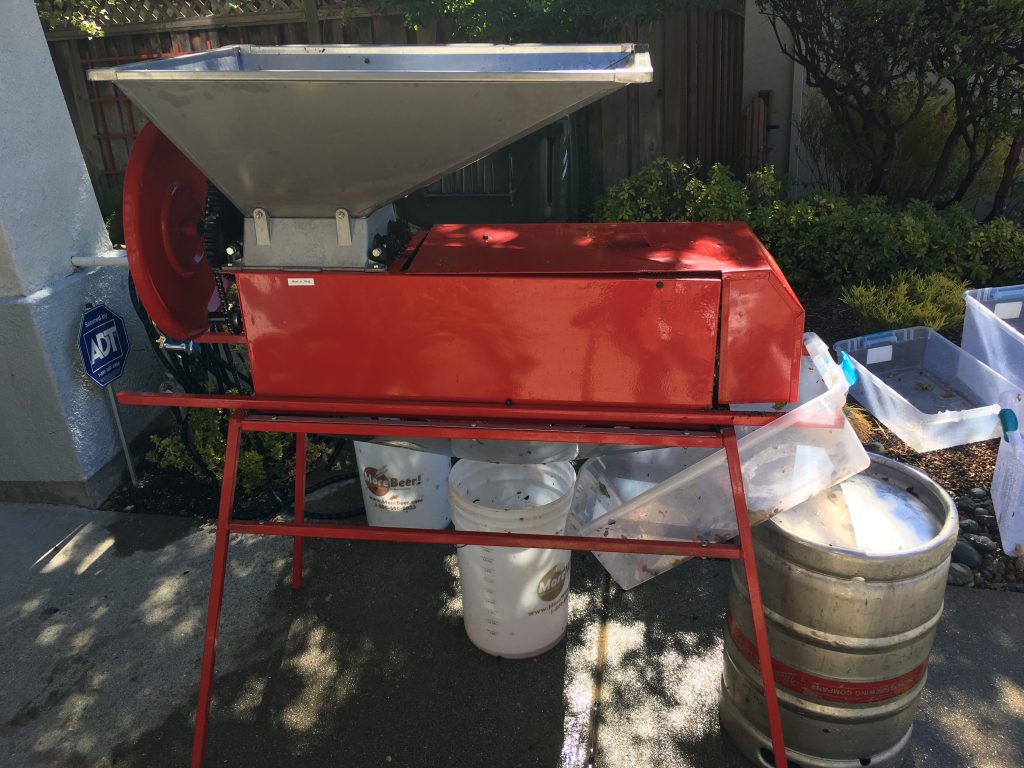 I went to MoreBeer that afternoon and got the yeast. I wanted BDX like I had in 2018 with that Merlot. But apparently it’s been renamed Bordeaux Red (lame name!). I got some yeast nutrients, and malolactic bacteria.

October 2, 2021 – Press Day
We pressed today. I’ve been looking to purchase a press for a few weeks no, to no avail. I thought it would be easy to scoop one of these up on the used market, but it wasn’t. Further, even the stores didn’t have what I wanted for sale new! In years past, I’ve rented a #40 with a 18.5 gallon basket. And I could do a whole fermentor in one of these, meaning I had to do 3 loads. This year, I rented a #30 with a 8 gallon basket. And just as the math would say, I did juuust over 2 loads per fermentor; I think I did 7 loads total. It was somewhat more cumbersome to do more loads, packing, unpacking, disposing, etc. But there were some benefits. Notably, it’s short enough that it will fit in the perfect spot in my garage; this is really the most important factor. Secondarily, moving it around is just so much easier. Fitting it in my car, as well. It was also sooooo much easier to do this at my house, rather than the apartment. I didn’t have to lug all the equipment up/down stairs.
There was a hose ready. One downside to the event, we overflowed some kegs and the wine kinda stained the concrete in the backyard. I hope time will fade it away. We carried all the kegs back into the garage and dumped the pomace into the green bin (which was fully taken away by the garbage truck the next day, another big win). I’m left with 4 kegs, 1 one gallon jug and 3 half gallon jugs. I’m sure those jugs will be very useful for lees replacement, and maybe topping off down the line ….

October 4, 2021 – Apple Press Day
Colin is making apple with again this year. He brought over apples again a couple days ago for press day. And he used the apple crusher I got him a couple years ago. I was focused on the wine, but I know he crushed the apples, added water, and added sugar. He also added some enzymes? chemicals? tannins? I’m not sure. He had TODO lbs of apples. I added yeast ~24 hours later. And we pressed it Monday morning in two loads. Since it was still fermenting, I couldn’t fill a keg to the brim. I filled it close to the top, and there’s another carboy of ~2 gallon. I’ll bet I have 1 keg plus 1 gallon of apple wine, likely enough for lees replacement.

October 24, 2021
In a fervor, right before leaving on my honeymoon, I really wanted to rack the wine. It’s been over 3 weeks since the pressing, and I wanted to remove the gross lees from the wine. I even racked the growlers, so they are clean (except one). I worked in my garage on a rainy day, and was able to get it all done. I have one main carboy will most of the lees in it, then another with some lees. When I get back, I’ll consolidate the 3 carboys into a keg, and use the growlers to top it off from the lost lees. I’m hopeful the lees removed is equal to the growlers I have.

One thing, the apple wine isn’t fully fermented :-/ I measured its brix at about 6, which isn’t good. We’ll see what we want to do going forward. UPDATE: November 13, 2021. I consolidated the carboys into #3. I lost about 1gal of lees in the “collector” carboy. And I added two half gallon growlers into it, so I a 1 gal growler and a half gal growler. I added 30-40ppm SO2 to all wine (not apple wine). The brix on the apple wine is now 3.

February 11, 2022
One week ago, Friday 4th, I went down to Union City to buy a wine barrel for $169. It’s used, and the guy didn’t know a ton about its history, but it appears to be 10-12 years old (older than I thought), French oak, and visually looks better than I was expecting. I barely fit in the mouth of my car, but I got it home and unloaded fine.

The next day, I filled it to the brim with regular tap water in my backyard and left it there for three days. At the staves seems, the wood was visually a little wet, so it was technically leaking ever so slightly just at the ~1 hour mark. After that, there was never any visual wetness on the outside of the barrel. After 72 hours, I dumped the water (sending as much to my plants as possible), and left it in my garage, bung hole down, to dry and drain. I left it like that for 48 hours.

That brings my to today. I bought a rubber mat, to put below it, and positioned it right next to my hot water heater in the garage. It’ll weight ~600 lbs when full, so there’s no moving it! I then siphoned all 4 kegs into the barrel. This will serve as racking #2 (and very likely the final one). I added one tablespoon of SO2 to add 50ppm (1/4tsp per 6 gal = 40ppm, so 10/4 tsp per 60 gal = 40ppm). I filled it to the very brim and sealed it with the bung. This barrel will likely not add any oak flavor, so I’ll probably want to add about 24oz of french oak cubes, and put them in a sack for easy retrieval.

There was about 1 extra gallon of dregs, which I put in two half gallon growlers. Additionally, I have a 1 gal glass growler and a .5 gal glass growler. Those will serve as topping off wine when I revisit this monthly. I filled it to the tippy top, and it squirted out when I capped it (so there was NO headspace). The bung then popped off an hour later, and again over night some time. I think I need some headspace to handle the expansion and contraction, so I took out ~half of a bottle. I hope that will work.

That’s it! This is very exciting! Let the microoxidation begin! 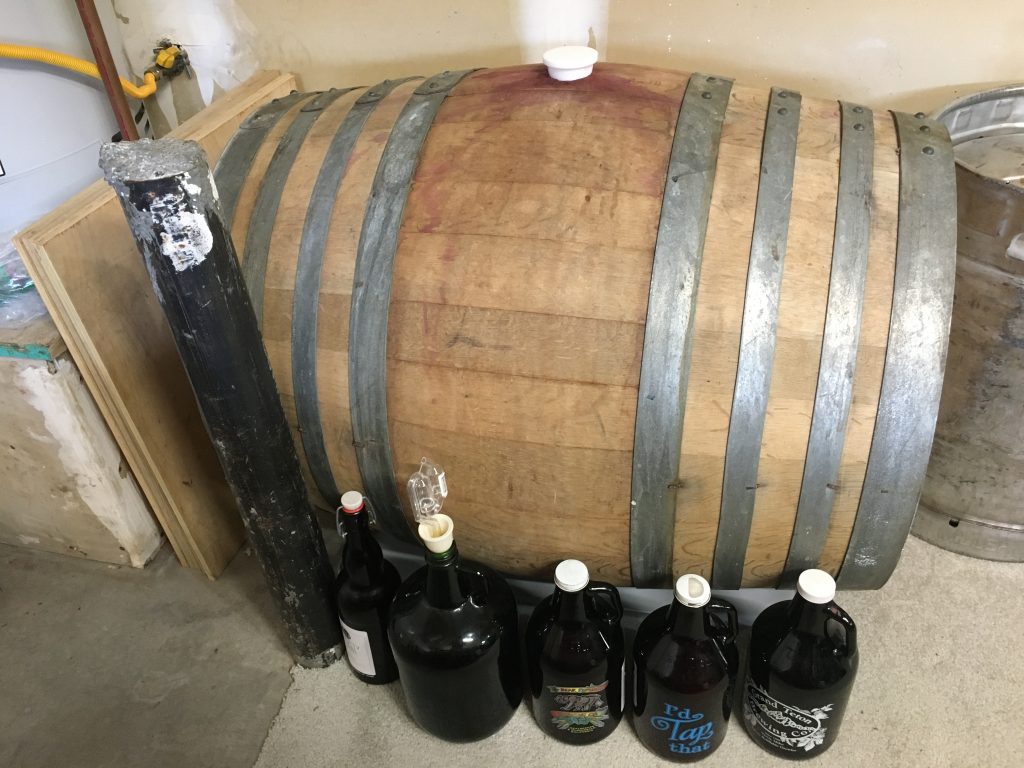 July 2, 2022
I did a titration, and found that there was 20ppm of SO2. I’m told that being in a barrel causes more SO2 to be lost. I added almost 2tsp of SO2 to bring it to around 50ppm. I put in a large mesh sack and dropped in 1lbs of French oak cubes. I tied the top of it to some small string and ran that along side the bung and tied it to a tack on the outside. In this manner, I can fetch the bag when needed. It maaaaaay be a problem to get these oak cubes out, but we’ll see. I thought long and hard about it, and couldn’t come up a good system to put it in and out easily. I also topped it with .75 gal, one monkey head and one growler. (I think I’ve topped it once before with .5 gal since I put it in here in Feb, but I can’t find a record of that!)