Year 9 of winemaking begins. I wanted to branch out of the recent glut of Merlot and Cabernet from my Livermore grower. I went looking for some Old Vine Zinfandel from Lodi!

About The Grapes ….
So I found a Zinfandel grower in Lodi. They are Schulenburg Vineyard, they grow around 92 tons of Zinfandel on their property, and I think they lease neighboring properties as well. Scott and Wendy were happy to sell me 1000 pounds for $850. I asked for an extra hundred pounds (for Rose), but I’m not quite sure it was there after pressing it and seeing it in the fermentors. They picked it for me themselves starting around 3am without any down payment, or even meeting me in person. It was pretty nice and trusting of them. They had it waiting for me in a big tub when I arrived, guarded by the vineyard cat: 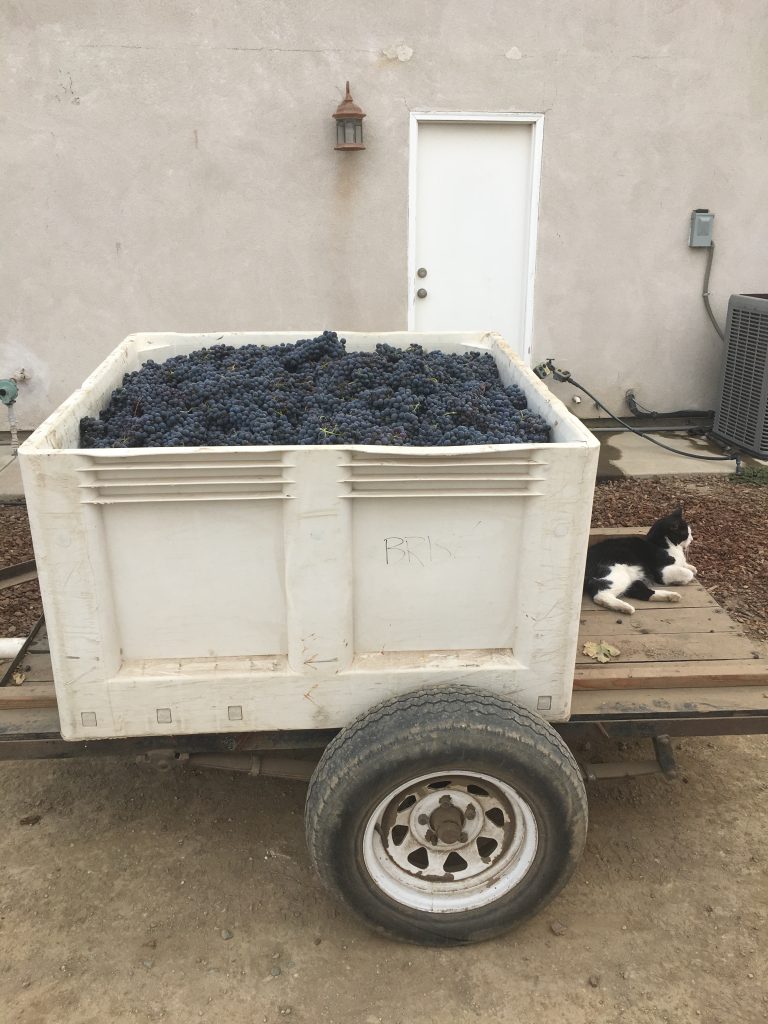 About The Crush ….
My back was incredibly bad this year. I couldn’t lift or do a thing, so I was purely a supervisor. I drove up there on September 11, 2022 with my dad and brother in Colin’s work truck. Wow it was nice using a truck! We brought the 3 44g fermentors in addition to my fleet of tubs. I also brought a pitch fork. Scott was nice enough to move the grapes to saw horses level with the bed of our truck. We used the pitch fork to load up our various vessels. Wow, it was sooooo much faster than years past. The pitch fork moved way more grapes than you could with your hands. And putting them directly into containers already in the car prevented lifting things into the truck (or, worse, the trunk of an SUV). In years past this part kinda sucked, and this was no problem at all. Also, we easily fit the 1000# in the bed of the truck, with bed space and container space to spare. We got back to my place, and parked the truck in the sidewalk with the crusher/destemmer right next to/below it: 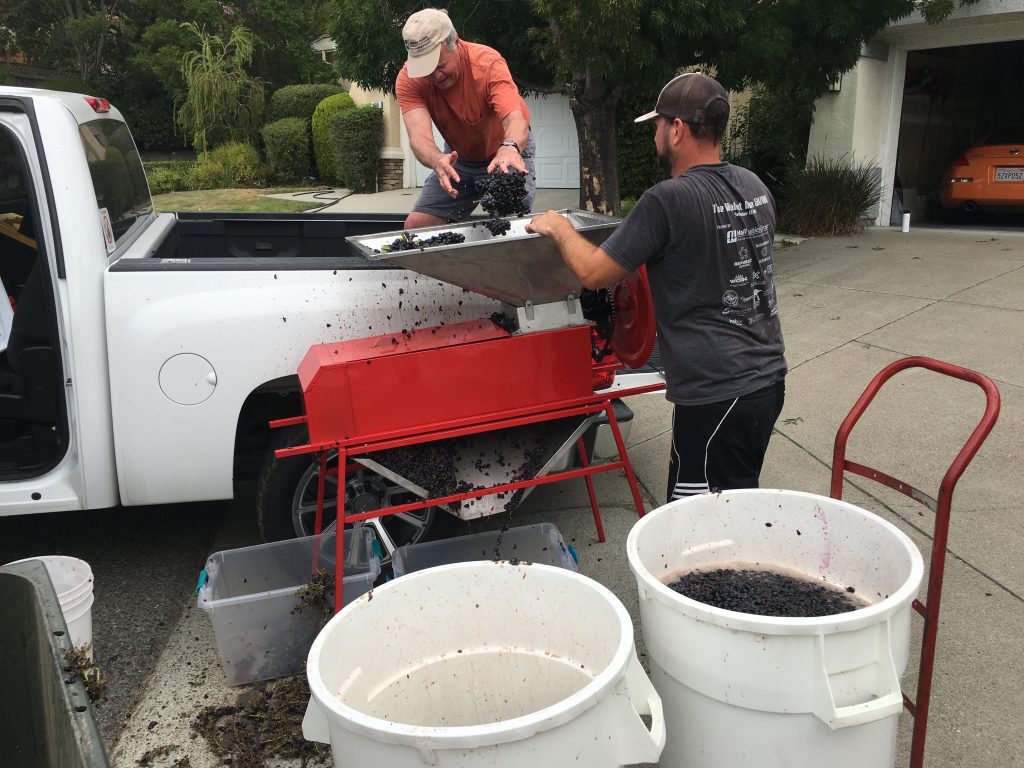 This allowed for the tossing of the grapes “downward” and not having to lift heavy things to shoulder height, another massive improvement. This process probably took 1.5 hours once we were set up. We filled the fermentors right there, and then used a dolly to move them into the garage. Cleanup was just hosing down the street, and cleaning the tubs in the shower.

I was worried this would be hard since I was injured, but the truck+forklift+pitchfork on the pickup and the loading from the truck into the crusher was sooooo much easier than I thought. This is a good model for future years. I dosed it in SO2 1.25tsp per bin targeting 30ppm. And I went to morebeer the next day to get yeast, yeast nutrients and malolactic bacteria.

September 21 – Day 10 – Press Day
We pressed today. I rented the press (the full, large size) from OakBarrel. Man, driving to Berkeley and back today (and the next day to return) was a lot! Maybe going to MoreWine in concord would be worth the increased price. 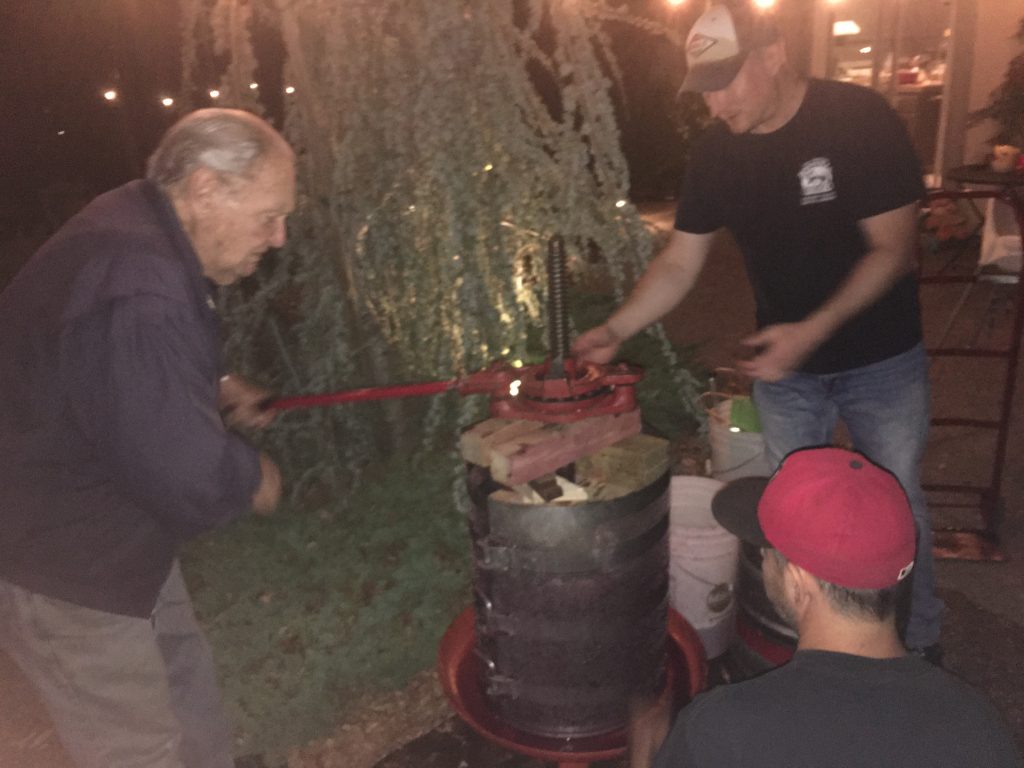 Things went pretty easy. My back wasn’t the best, so folks (mostly Colin) did most of the work. I siphoned the fermentors to make 60% full kegs, then carried those kegs to the backyard to fill from the press. I did each fermentor into one pressing (so three press loads). Each fermentor was a little less than full which furthers my thought that I got less weight than I wanted. In the end, I have 4 kegs, one 1 gal growler, and 3 half gal growlers. They are perking in the garage, and will be racked soon and I’m afraid I will have less than 4 kegs soon, and not have enough topping wine for the barrel later.

November 17 – First Racking
I racked the 4 kegs into 3 kegs and 3 5gal carboys. I left a generous amount in the bottom to send to the carboys since I had 3 to fill, the hope is that the kegs are extra clean and the carboys get all the lees. I put 100ppm SO2 into the kegs and one carboy. So in a couple days, I need to combine the 3 carboys and various growlers into a keg for long term aging.